It’s been a while since I last received word from a globetrotting Beastie, so you can probably imagine how delighted I was when Grim Reaper Beastie got in touch earlier this week! As it happens, he’s been to Hawaii… but of course he had very little interest in going to a luau or hanging out on the beach in a brightly-coloured shirt (hilarious as that would be). I think you’ll agree that he looks much more in his element here…

… Because as we all know, the Hawaiian islands are a (literal!) hotbed of volcanic activity. And it seems that Grim Reaper Beastie is quite the amateur volcanologist – here he is again, scrambling around among the lava fields around Kilauea on Big Island!

I think he looks right at home here, don’t you? However, not all of the rocks were suitable for such up-close inspection… For starters, there’s quite a lot of red hot liquid lava around. 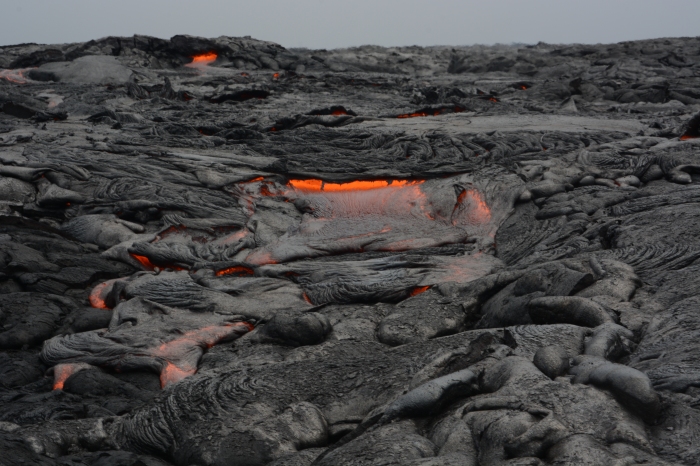 And if you think that’s awesome, you should see it after dark!

It also helps to get a bird’s eye view… If you look really closely in the bottom third of this photo, you can see a few fine orange specks where the lava is meeting the sea – and the clouds of steam this produces!

Fortunately, the lava around here moves pretty slowly, so Grim Reaper Beastie could watch it bubble up from the centre of the earth without having to worry about getting his toes burnt. Here, have a look for yourself!

Can anyone else see a monster face appearing in the hot lava towards the end of the video, or is that just me?!

But not every volcano in this area of Big Island is active. Grim Reaper Beastie finished up his tour at Devastation Trail, which was last affected by the eruption of Kilauea Iki in 1959. Here, shrubs and flowering plants have gradually started to recolonise this stark landscape of stones and cinders!

A perfect end to a perfect day of exploration!

Thanks to Nicole for letting Grim Reaper Beastie stow away in her suitcase, and for sending me his holiday snaps – it looks like you had a super trip! And be sure to join us again on Tuesday to meet some new Beasties, then next Friday we’ll be sharing more Beastie adventures abroad! See you then!