Sometimes, projects take longer to come together than you expect. And sometimes they take a lot longer. I thought Beasties with dogs were my big crafting leap forward this year, but that was before I met Dragon Slayer Beastie! I first did the sketches for this commission back in April… 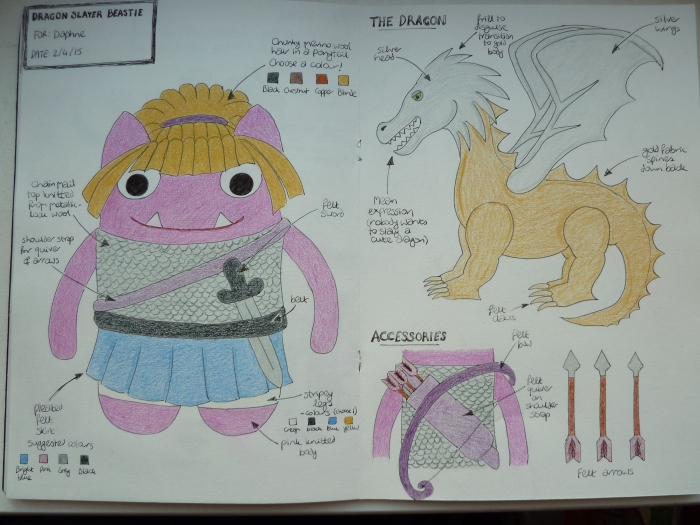 …and back then I thought sketching up the dragon in the first place would be the hardest part!

Dragon Slayer Beastie was requested by a Beastie enthusiast who already has quite a family of little woolly monsters at home. They had attracted the attention of her young neighbour, and when the offer of a birthday Beastie was made, she decided (without any hesitation, apparently) that she’d like a Dragon Slayer Beastie, complete with dragon. As you can see from the sketch, the dragon had to have a golden body, and a silver head and wings. “Hmmm,” I thought. “Could be tricky, but I can probably manage it!”
I figured that seeing a few Shrek and Harry Potter films, plus my current enthusiasm for Game of Thrones, combined with more than a couple of years of experience in sewing my own critters from scratch, would all be ample preparation for the crafting challenges ahead.

You can probably tell where this is going.

It started out normally enough… Making the Beastie herself was a breeze! 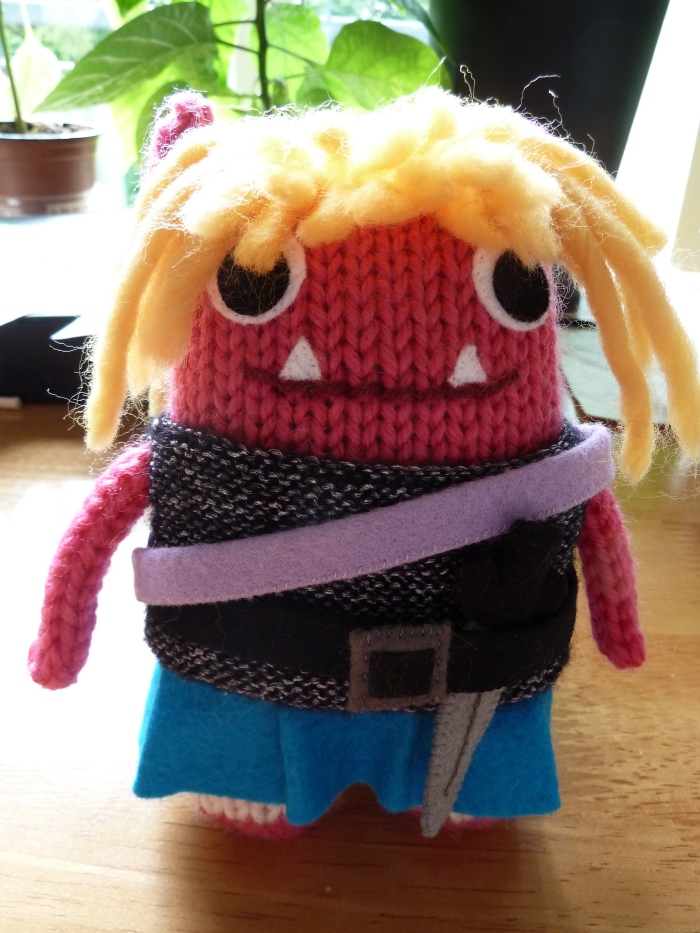 As you can see, she’s ready to face down any dragon who dares to cross her path! She’s got a chain-mail top, and she’s armed with a lethal felt sword. Over her shoulder is a quiver of deadly felt arrows, to be used for long-range dragon-slaying missions…

So she had her outfit, and her weapons (in a range of suitably ladylike colours) were complete… 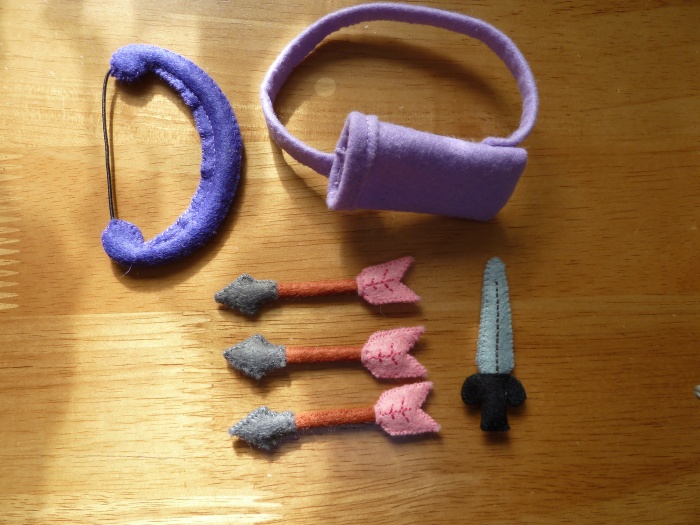 …But where’s the dragon?

Uh-oh. Still stuck in what was proving to be a troublesome prototyping stage.

You see, the nature of the beast meant that I had to step out of my cosy felty comfort zone and use different, unfamiliar materials. And it was only when I started sewing pieces together that I found out how completely different and unfamiliar they were! Fortunately, I had the good sense to reject the gold and silver lycra I had originally planned to use – when I subjected them to the all-important stretchiness test in the shop, they proved themselves to be more suited to making eye-popping party clothes than dragons. If I’d gone with my first instinct, it’s more than likely that this post would be coming to you from within the padded walls of my nearest mental health facility.

So, I went for some less temperamental satin fabrics instead… but even these proved a far cry from the wholesome, homely materials I normally use. First of all, I had to allow for fraying – something you never have to deal with when you use felt! Another of their less charming characteristics is that they show up every little detail, meaning that any slight variations between component pieces are magnified tenfold. Even doing a “rough work” dragon with some leftover calico I had at home didn’t prepare me for making the real thing… Satin fabrics, I have discovered, are designed to drape elegantly, not hold in stuffing. If you’ve ever seen someone wearing a satin dress that was a size too small, you might have an idea of what I was up against. In my quest to tame this dragon, I took on lumpy body parts, misbehaving limbs that stood out at unnatural angles from their joints, twisted tails and floppy spines. I cut, trimmed and rejected heaps of templates…

…Made a few false starts… 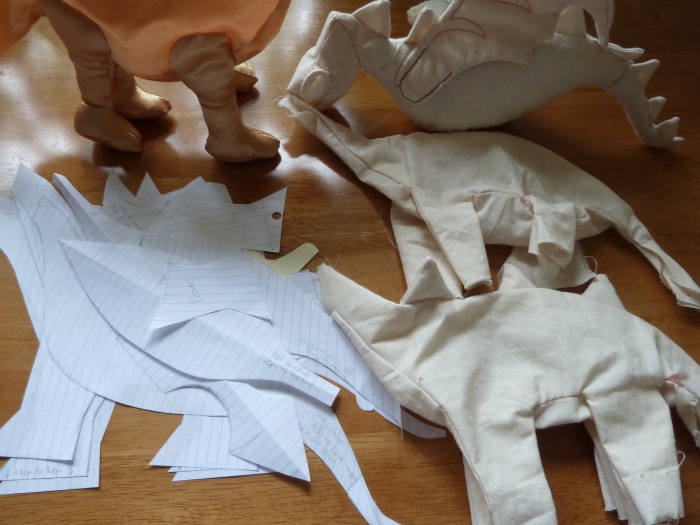 …But at last (and we’re talking absolute eleventh hour, down to the wire, seconds-to-spare-before-the-deadline here) I managed to wrangle the various bits into something vaguely dragon-shaped. Here he is snacking on the remains of his vanquished predecessors.

And here he is doing his nicest smile for the camera.

I’d be the first to admit that he’s not perfect. But it’s a long time since I’ve had a craft project flummox me so completely… Every spare moment I had (and some less spare moments… sorry, workplace!) was spent trying to figure out what was going wrong with the templates, or how I could force the wilful satin to do my bidding. The end result may not accurately reflect the late nights, early mornings, miles of unpicked and restitched seams and lungfuls of inhaled satin dust (seriously, that stuff gets EVERYWHERE) that went into making it, but as a learning experience it was hard to beat. I know I have a long way to go before I can claim to be anything other than a paddler in the vast ocean of sewing skills, but I figure that’s a great excuse to go back and perfect some of the basics with simple, fun projects. So, if you have any favourite sewing patterns that would be good practice, I’d love to hear from you! Please share them in the comments… especially if they’re for little critters! I’ll be sure to post the results on the BeastieBlog as I go 🙂

As for Dragon Slayer Beastie and her dragon… the last I saw of them, they were heading off into the sunset to find their new home!

9 thoughts on “How to Slay a Dragon”