About a month ago, Boyfriend and Flatmate decided it was time to revisit the Rambo films. I have to say, they don’t make especially good knitting radio, since the soundtrack is more explosions, gunfire and screaming than actual dialogue, but they did give me an idea for a new Beastie. I am proud to introduce… Rambo Beastie!

He’s a little less smiley than some of my other creations, but he’s had a pretty rough time of it these last few years.

However, I did my best to cheer him up with some authentic Rambo accessories – combat trousers with a real leather belt, red bandana and an awesome 80s hairdo! 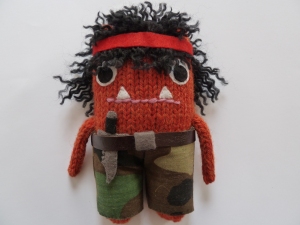 Oh yes, and he has a replica of the knife from the first film – lovingly recreated in lethally sharp… felt. Ahem.

I was hoping he’d stick around for a while, but it wasn’t long before he escaped back into the woods on another one-Beastie campaign…