Hello everyone! Well, last week I promised you a visit to one of County Antrim’s most famous landmarks… And here we are! Plunkett is especially excited – this attraction does have a very geological slant.

He’s just spotted it there in the distance… The Giant’s Causeway! Time to rush over for a closer peek.

Normally Paddy is left stony-faced by Plunkett’s enthusiasm for rocks, but even he has to admit that this is pretty cool.

Even more so when he hears about how they got here. Volcanoes are always awesome, even if they happened 60 million years ago! And this is just the beginning. 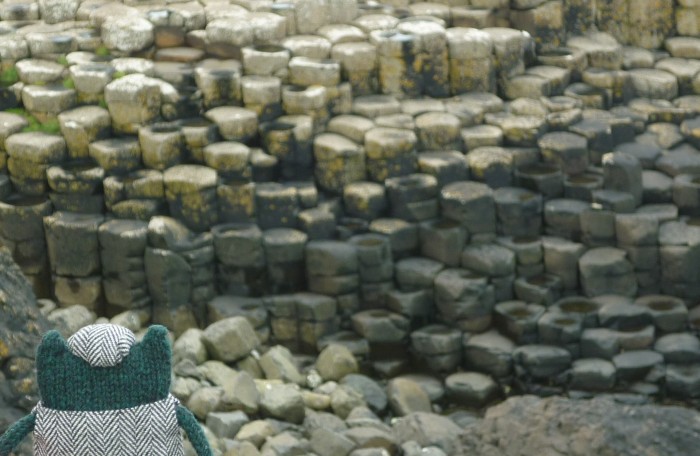 As you get closer to the sea, the grass and plants disappear and you can see the hexagonal stone columns all the more clearly. The Giant’s Causeway is made up of more than 40,000 of these hexagons, neatly stacked together!

And while Plunkett admires the stones, Paddy has been learning about how this place got its name. It turns out there are lots of myths and legends about the Giant’s Causeway! Early people apparently had a lot of fun figuring out how the stones came to look this way.

The most popular story, and the one I learned as a child, is that local giant Finn McCool (Fionn mac Cumhaill in Irish, and you’ll come across lots of alternative spellings that fall somewhere in between the two as well) had an ongoing rivalry with another giant who lived across the water in Scotland. After a few rounds of long distance name-calling and threats, Finn decided to kick things up a gear, and he built a series of stepping stones – the Giant’s Causeway – so he could cross the sea and challenge Benandonner, the Scottish giant, to a physical fight.

Unfortunately, the downside of exchanging insults across a stretch of ocean is that it makes it tricky to gauge the size and strength of your opponent. Once in Scotland, Finn discovered that Benandonner was a good bit bigger than he’d expected. Oh well, never mind. There was still time to leg it back across the causeway, breaking it up on the way so that Benandonner couldn’t follow him. Right?

Benandonner spotted Finn, and started chasing him home. And Finn would have taken a giant-sized beating, had he not been married to a smart lady called Oonagh. She had the genius idea of wrapping her big-mouth husband in blankets, and popping him in an oversized crib – which she’d apparently been keeping in the house for just this sort of eventuality. When Benandonner showed up at the door, she invited him in, and introduced him to her sweet little baby boy. Thinking that Finn in disguise was his rival’s son, and in that case that he was the one who would most likely come up short in a fight, Benandonner turned tail and ran. Nice one, Oonagh!

Fortunately, the boys didn’t see any warring giants on the day they visited.

And yes, you are allowed to walk on the stones! The lads took full advantage of that. 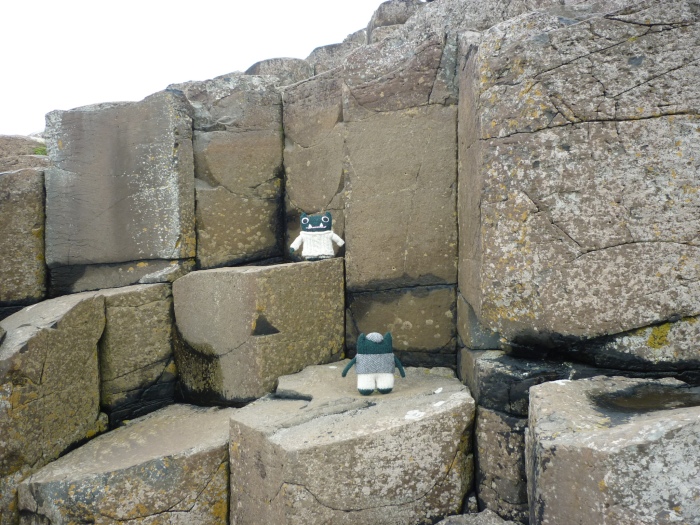 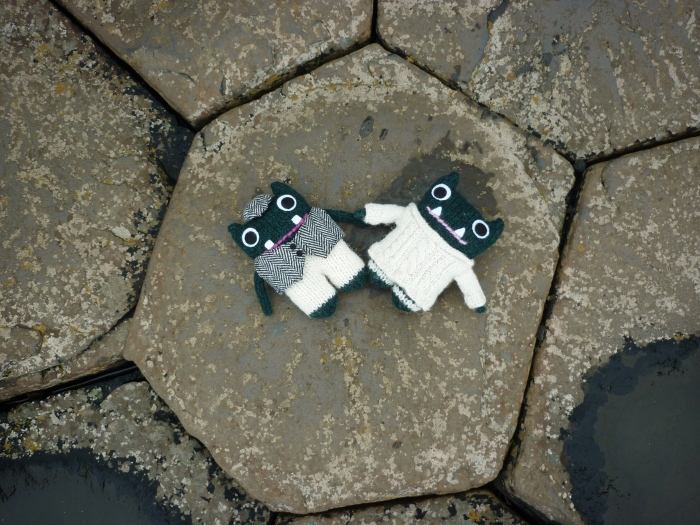 Then there was just time to grab a couple more photos… 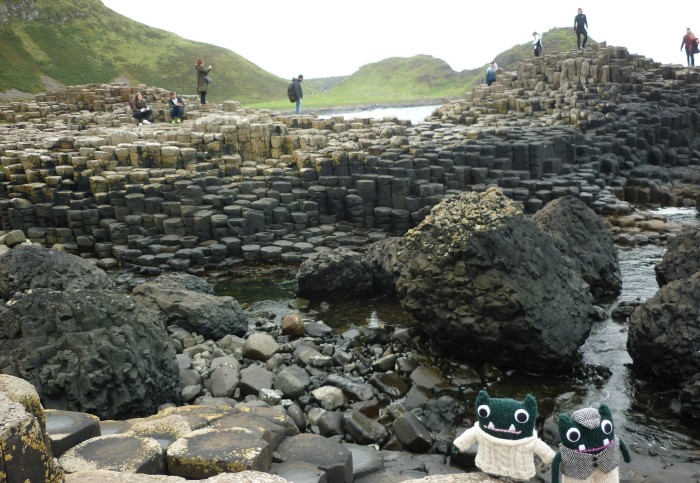 “Come on Paddy, we don’t want to miss our train home!”

Made it! And with seconds to spare!

See you all next time!

Access to the Giant’s Causeway World Heritage Site is free, as long as you arrive on foot. If you drive there, expect to pay a hefty fee to park your car in the Visitor Centre car park! The Giant’s Causeway & Bushmills Railway train takes about half an hour to travel from Bushmills to near the Causeway. That means you can sit back and enjoy the scenery… And sneakily avoid paying for parking by using their free car park at the Bushmills station.

16 thoughts on “Tales of the Giant’s Causeway, with Paddy and Plunkett”