Hello everybody! Well, I think the title says it all – the terrible twosome are out on tour again, and look where they’ve washed up! I think Belfast’s Titanic Quarter had better brace itself…

Paddy was only a little disappointed that he wasn’t allowed to climb up on one of the silvery points and shout “I’m the king of the world!” at passers by. But once Plunkett pointed out that no-one would be able to see him up there anyway, he agreed that a portrait on the steps was a better way to go.

They also encountered a Beastie-sized version of the famous ship herself!

This sculpture by English artist Andy Stallard shows the celebrated liner as an Airfix model kit… And local engineering firm Harland and Wolff (who built the real Titanic) assisted in its creation!

Further along, you can meet another member of the Titanic family… Not a sister ship exactly, but definitely part of the clan!

This is the Nomadic, the last surviving White Star Line ship in the world!

White Star’s “Olympic” class of liners, which included the Titanic and her sister ships the Olympic and the Britannic, were designed to impress the whole world with their over-the-top luxury and enormous size. Unfortunately, this meant that some of the ports they called at were simply too small to let them in! That’s where the Nomadic and her sister ship, the Traffic, came in handy.

These smaller “tender” ships brought passengers and their luggage, plus cargo, mail and supplies for the ship, from the harbour at Cherbourg out to where the massive liners were moored. Nomadic was primarily reserved for the first and second class passengers, which meant that she was much fancier than your average tender! In her heyday, she was tricked out with cushioned benches, tables, porcelain water fountains, a buffet bar and separate ladies’ and gents’ toilets, and her interiors were lavishly decorated.

It hasn’t all been fun and games for her though… In her lifetime, she’s served in two World Wars, performing duties such as minesweeping and transporting troops. She’s been a floating restaurant in Paris, and has narrowly avoided being scrapped on more than one occasion! She finally came home to Belfast in 2006, after several maritime and historical groups clubbed together to raise the money to buy her and restore her to her former glory.

The first phase of renovations were completed in 2012, and isn’t she looking great?

Paddy is most impressed!

And there was more to come in their tour of Belfast’s historic docklands! Time to hop on the Wee Tram, to take us to our next destination! 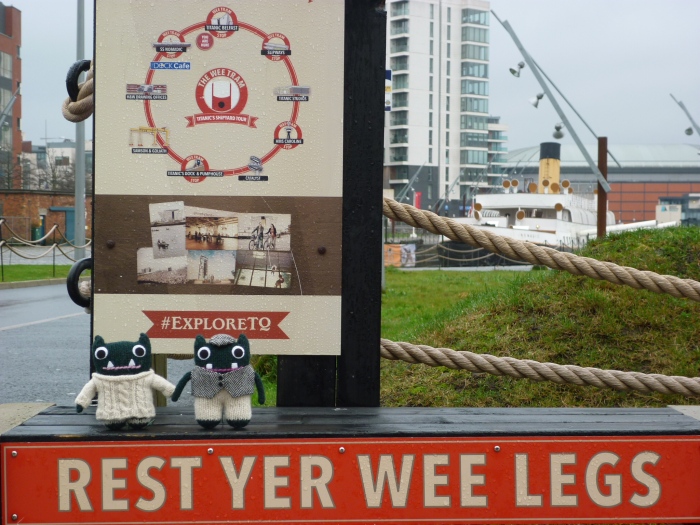 Beastie legs are of course wee-er than human legs, and more in need of rest!

And here we are at… The Titanic Slipway!

This is where the Titanic was built and launched, more than 100 years ago. This slipway was originally designed to accommodate 3 ships, but because the Olympic-class liners were so big, the area was reconfigured for 2 larger vessels. The line of posts down the left side of the photo shows how long Titanic was – Plunkett is mesmerised by the sheer scale of it! Meanwhile, Paddy has gone to trace the ship’s “footprint”, which is outlined in granite cobbles, and lit up in blue after dark!

Then there was one more famous ship to visit – one that, unlike the Titanic and her sisters, survived the First World War, and got to retire to the Belfast docklands! Meet HMS Caroline, the last survivor of the Battle of Jutland… One of the largest naval battles in history. 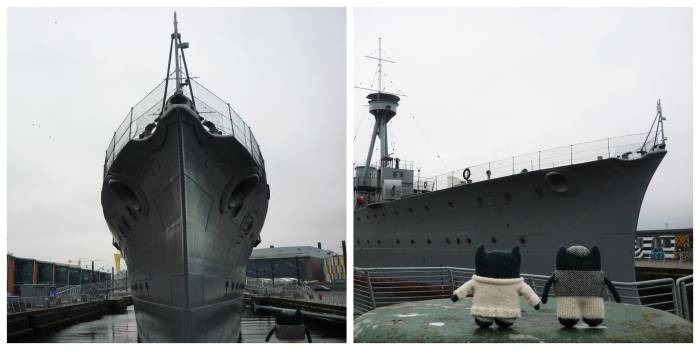 And as the sun set on another Beastie adventure, the boys took a detour to visit a new addition to the Titanic Quarter… One that they thought I would especially like to see. 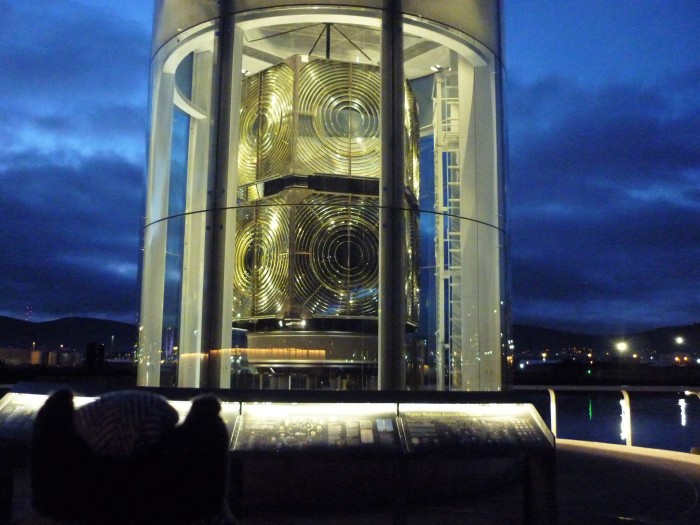 This is the Great Light, which was opened to the public last summer. It’s made from the lenses of a lighthouse on Mew Island, the smallest of a group of 3 islands called the Copelands that lie just off the coast of north County Down. As a young’un, I spent many happy weekends running around neighbouring Lighthouse Island (yes, I know… The lighthouse used to be on Lighthouse Island!), and the sweeping light of the lighthouse became a familiar sight after dark. I was also rudely awoken by the foghorn one night as well, but that’s another story!

Anyway, the lighthouse was upgraded in 2014, and now has a blinking, solar-powered LED lamp. And it turns out that the 130-year-old original lamp is a valuable part of the area’s maritime heritage! So now it lives here, where it’s much easier for people (and Beasties) to visit. Thanks, boys!

That’s all from us this week… Join us again next Tuesday, when we’ll be back on dry land for more monster shenanigans! See you then!

PS Any links in this post are there because I think they’re interesting, not because Paddy and Plunkett are being paid to promote certain attractions!

19 thoughts on “A Titanic Adventure for Paddy and Plunkett!”