OK, so the last couple of posts here on the BeastieBlog have been a little on the wild side…

… But there’s more to Frankfurt than its zoo, y’know! Today, we’re going to take a trip into the city centre in search of some culture.

Even walking through the streets of Frankfurt was an interesting experience – everywhere we turned, it seemed that old-fashioned buildings were rubbing shoulders with the towering glass skyscrapers that you’d expect to see in one of Europe’s main financial centres.

That said, there’s a good chance that many of these classical-looking buildings aren’t much older than their shiny modern neighbours. Like many cities in the industrial Rhineland region, Frankfurt was heavily bombed in the Second World War, and its renowned medieval town centre was hit especially hard.

This blend is clearer as you approach the river Main… 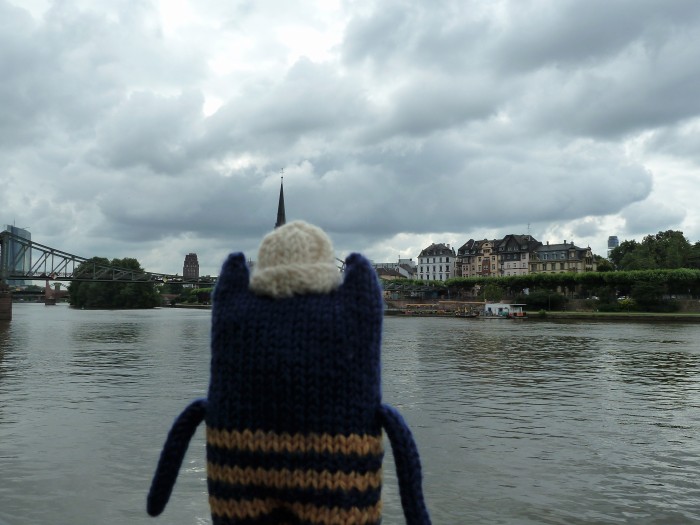 …Well, it would be if a certain Beastie wasn’t hogging centre stage! The Main cuts the city neatly in half, and since we needed to be on the other side, we made a beeline for that bridge up ahead.

And we chose our crossing point well! This is the Eiserner Steg (Iron Bridge), a pedestrian bridge which is a great place to stop and admire the cityscape…

… Or, if you’re Explorer Beastie, to hang out among the love locks.

On the other side, we wandered down the riverbank for a while – mostly because I am atrocious at navigation and took a wrong turn at the end of the bridge. I’m glad I did though, because otherwise we would have missed this place! 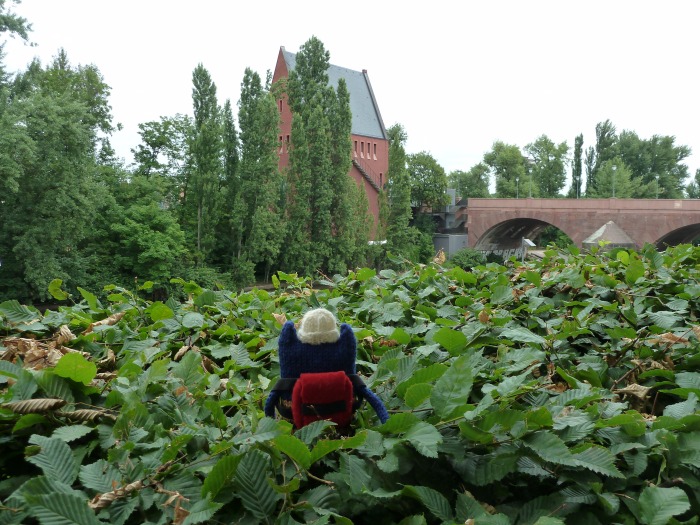 It looks like a magical castle, lost in a leafy forest… But this unusual building actually houses a contemporary art gallery called Portikus. Portikus has had a couple of homes around Frankfurt since it was founded in 1987, the first of them being the portico of the old public library building, which is where the name comes from. The gallery finally moved into its first purpose-built home in this tower on an island in the Main in 2006.

We’ll have to save our visit for another day though, because we already had a plan! Onwards!

And here we are. Look, someone’s even opening the door for us. 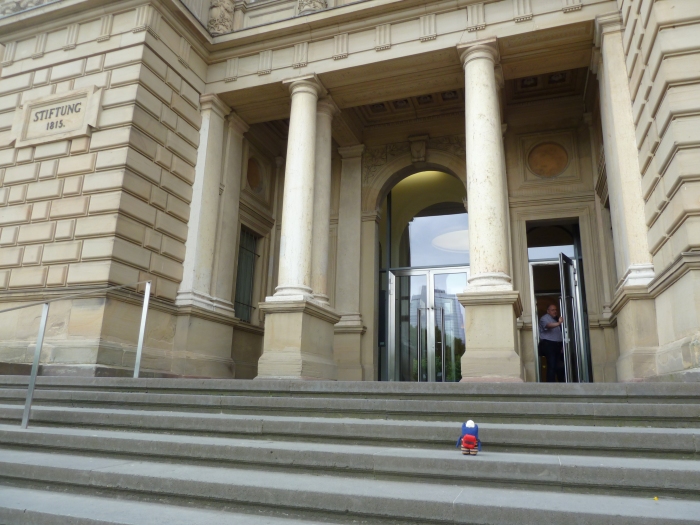 This is the Städel Museum, home to a vast art collection that includes everything from old masters to contemporary artists from Germany and further afield.

We thought we’d start at the beginning, with the Old Masters on the top floor. That meant tackling some stairs!

Phew! Poor Explorer Beastie needed a bit of a rest after that lot… Although he pretended he was just examining this wall of portraits. 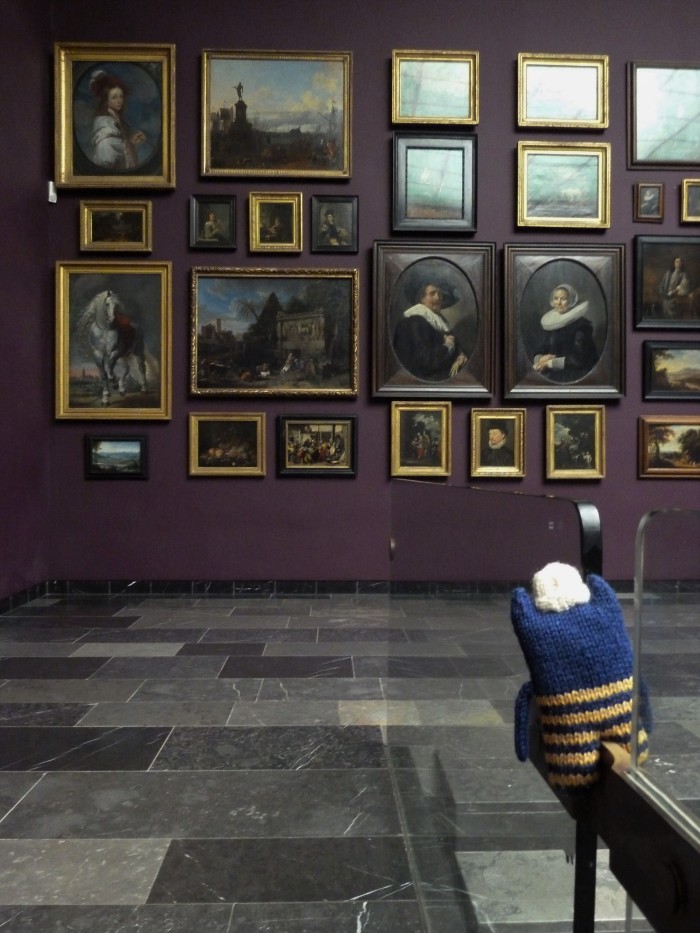 The Old Masters gallery is brimming over with incredible paintings, some of them dating back to the late Middle Ages! Since I know some of you will be reading this over lunchtime, I’ll spare you the gory crucifixion and martyrdom images that seemed to so inspire artists at that time, and share this picture of Explorer Beastie examining “The Geographer” by Vermeer instead. 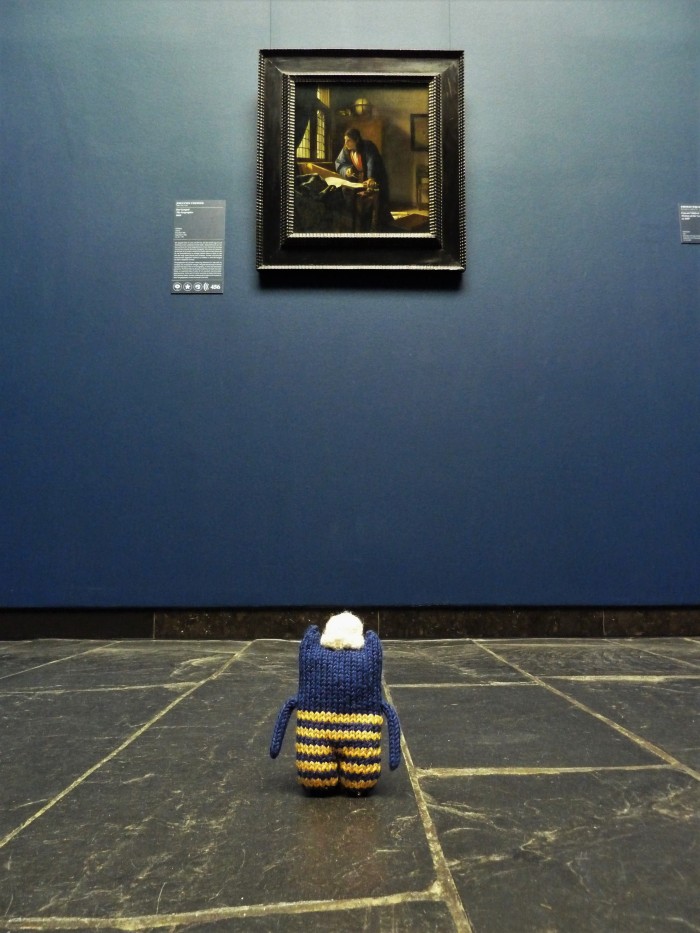 And speaking of lunch… As we made our way onwards into the modern era, we stumbled upon a Renoir!

That’s it on the left – and how appropriate that it’s called “La Fin du Déjeuner” (After the Luncheon)! But if you’re still hungry, perhaps I can tempt you with some Mondspargel (Moon Asparagus)…

Hey, didn’t we just cross that bridge earlier? I suppose we were lucky that the river below wasn’t full of ice, as it is in the painting. Brrrr!

This brought us nearly to the present day. So after a quick photo opportunity at John Armleder’s Mirror Mosaic wallpiece… 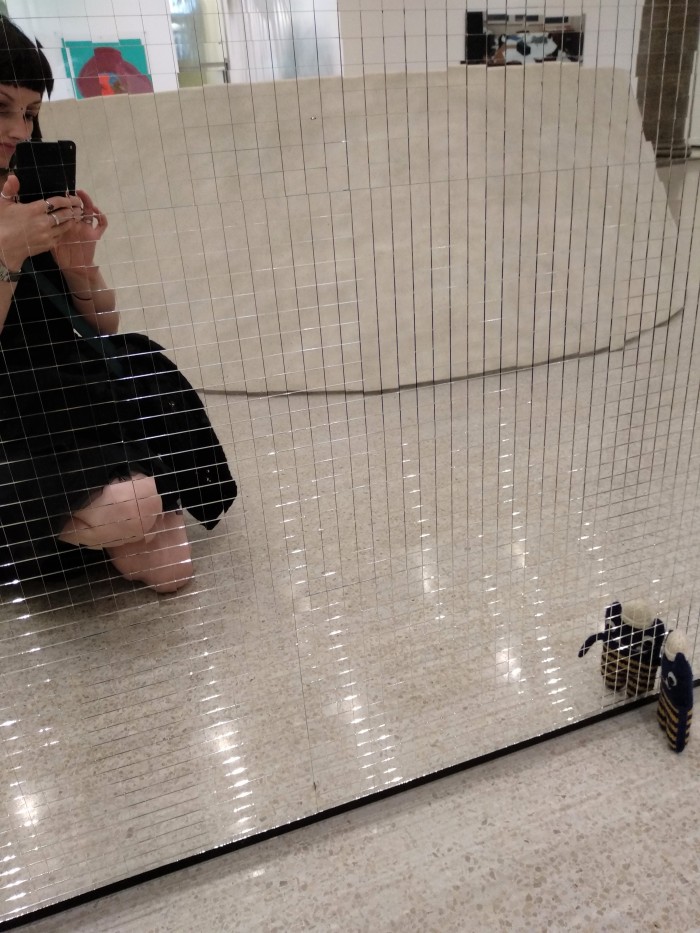 … We headed underground to check out the Städel’s contemporary collection.

Out of all the pieces on display, Explorer Beastie particularly wanted to have his photo taken with this Rosemarie Trockel piece – can you figure out why?

No, its nothing to do with the reference to the 90s… Although that was always going to catch my eye! Here, look a little closer…

It’s knitted! Explorer Beastie found this particularly inspiring – he says he never realised art was in the very fabric of his being. Now he’s planning his first solo show.

So, since he had work to do, there was just time for one last shot in this awesome space…

… Before we headed back upstairs to ground level!

And believe me, we only scratched the surface of this incredible museum… So if you ever find yourself in Frankfurt, make sure it goes at the top of your to-see list!

We’ll be back on Friday with the last of our Germany photos, so be sure to join us for a monster-filled trip finale. See you then!