Or rather on the rails, because the boys recently took a road trip… By train!

Their first port of call after leaving home was (of course) a quick tea break in Belfast. You can’t go adventuring without fuelling up first!

They found a nice spot where they could look out at the City Hall, and watch the black taxis scoot by.

Then, suitably caffeinated, they continued on their journey – riding the train to the end of the line at Bangor, where they planned to have a look around Bangor Castle. Plunkett likes a good castle, as we all know. But there was a surprise in store for Paddy as well…

…A miniature version of the castle, built entirely from SUGAR! It’s lucky this was safely locked up in a glass case, or Paddy would have treated us all to his best Godzilla impersonation.

Bangor Castle (the real one!) has been here since 1852. It was built as a private residence for the Ward family, who quite literally used to own half the town of Bangor. When the last surviving member of the family died in the early 1940s, the local council bought Bangor Castle and converted its large “music salon” into a Council Chamber, and the rest of the building into offices. The castle’s courtyard and stables were then redeveloped to house a museum dedicated to the history of the local area, and that’s where the boys are headed!

Bangor has a rich history, which Plunkett can’t wait to read up about. Here he is learning all about St Comgall, who founded nearby Bangor Abbey in the middle of the 6th century AD.

He sounds like a barrel of laughs – according to Wikipedia, under his rule “prayer and fasting were incessant” and when you weren’t fasting, “food was scant and plain”. Despite this, Bangor grew to become one of the most important monastic sites in the Province, second only to Armagh.

Meanwhile, Paddy has skipped ahead, and discovered another miniature – this is how Bangor Abbey might have looked in its early days!

He also found this.

“Plunkett, look! I’m a knight!”
But Plunkett was a bit busy examining this spiffy slate sundial. 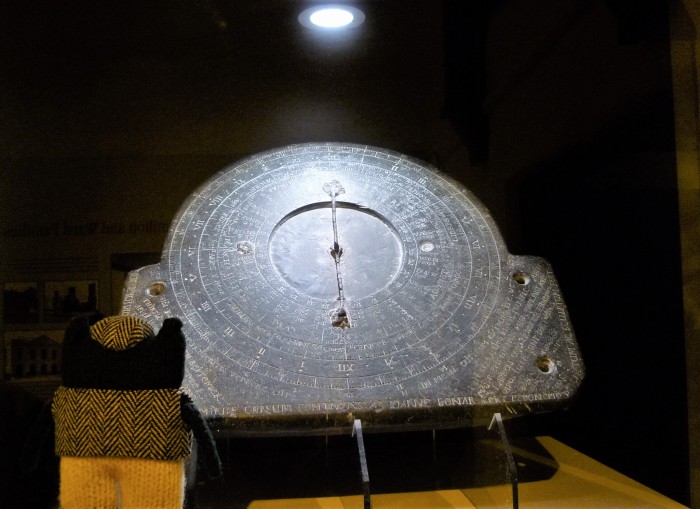 Made in 1630, it’s not just for telling the time! A skilled user (ie, not me) could use it to get information about the tides as well.

The lads did eventually reconvene, and took a quick breather on a beautiful wooden chair… 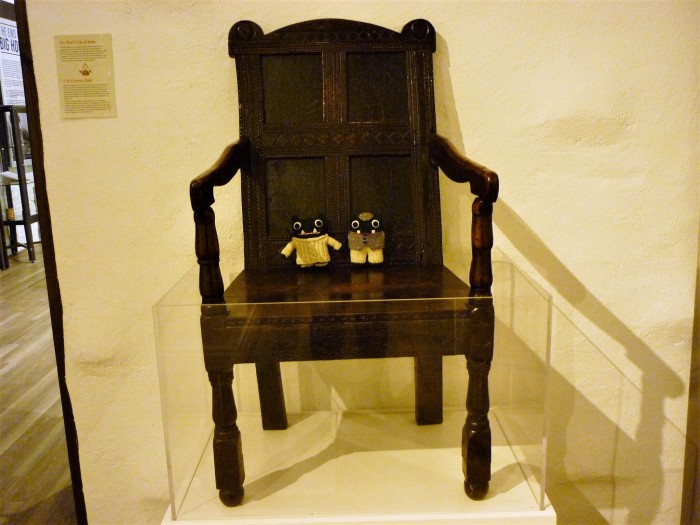 …Before heading outside to investigate this interesting hut, a reconstructed monk’s cell! It actually looks quite cosy, don’t you think?

Although perhaps a door might be a welcome addition. Then, Paddy spotted something…

“Plunkett, don’t we have boats like this at home?”
“We do, Paddy! It’s an Irish river curragh, and it was made by one of our human minders. Look, you can even see him at work in the photos on the information board!” 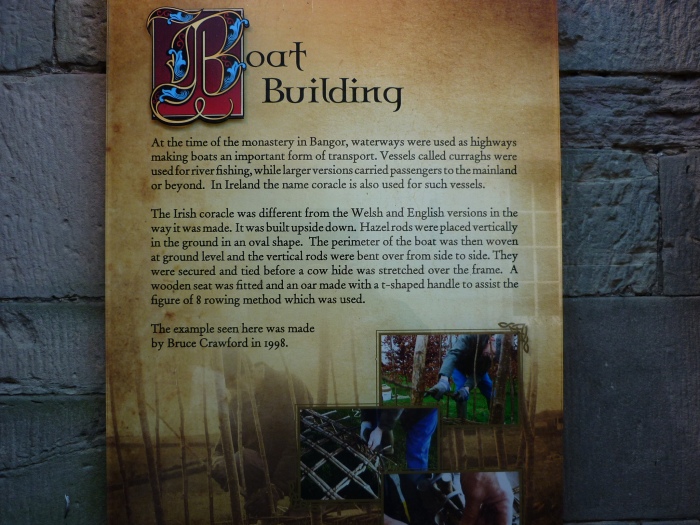 That revelation left Paddy wondering if this made him a celebrity, while Plunkett pondered the possibility that someday, someone might let him live in a museum. Deep in thought, they wandered back inside… Where they almost missed the Bangor Bell! 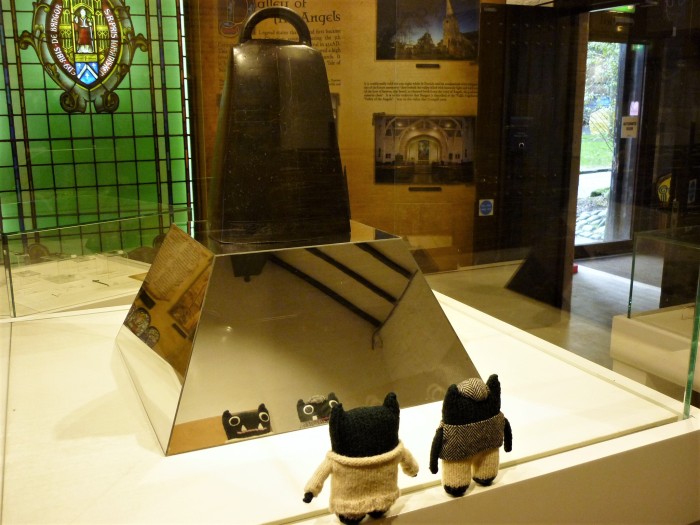 This bell is made of bronze, and dates back to the 9th century, when it was most likely used to summon monks to prayer. But it’s had an interesting life! The bell was apparently unearthed by gravediggers working in the Abbey churchyard in about 1780, leading people to think that it might have been buried there to hide it from marauding Vikings. It was a savvy move, since Bangor was plundered by the Norsemen at least once around this time – that’s the downside of building your Abbey with a sea view, I guess.

Speaking of sea views, there were plenty of those to be had from the train on the way home!

The boys also got a good look at another notable local pair, thanks to a little help from a fellow traveller!

The two massive cranes at the Harland and Wolff shipyard greet you as you head into Belfast from the east, and they’re probably the city’s most recognisable landmarks… their size and colour make them pretty hard to miss! Although they’re only relatively recent additions to a place that’s been home to humans since the Bronze Age, they’re now well and truly part of the skyline – so much so that they even have names! Goliath is the older of the two, and at a mere 96m (that’s 315 feet) tall, he’s a bit smaller than his “little” brother, 106m tall Samson.

Sounds like Paddy might be waiting a while for that daytrip. Please feel free to distract him by sharing your own recent adventures (preferably at ground level) in the comments!

And thanks so much to all of you who joined us for the first Friday Social last week! We’ll be back in a couple of days for another one… Catch you there!

40 thoughts on “Off the Rails with Paddy and Plunkett!”