Another day, another city!

Paddy and Plunkett have really been making the most of their tour of East Anglia, and today’s post finds them in another place famed for its cathedral – Norwich! Here’s the cathedral coming into view now… And as you can probably guess, Plunkett is champing at the bit to get inside for a look!

According to Plunkett’s research, this cathedral is more than 900 years old (construction started in 1096) and boasts the second tallest spire in England – a fitting landmark for a city that, in the 11th century, was second only to London in size and importance. Shall we wander over for a closer look?

Talk about making an entrance! This is one of two gates into the cathedral grounds. It’s called St Ethelbert’s Gate, and it actually used to contain a chapel to its namesake in its second storey. And although it looks like the real deal, this isn’t the original gate! It’s a 14th century rebuild, after the first one was destroyed in the riot of 1272.

Inside the cathedral, the boys were impressed by the beautiful long cloisters – perfect for a Beastie-sized afternoon stroll!

However, like many visitors, they weren’t able to agree on the new stained glass windows. They were designed by English abstract artist John McLean, and were installed on the north aisle in 2014. Apparently they’ve been causing controversy ever since!

Paddy loves the rich colours, and the way the bright light bounces around this corridor, which he thought would be pretty dark and boring otherwise. On the other hand, Plunkett really would have preferred to see something more traditional, and in keeping with the rest of the building. Whose side are you on?

Had the lads visited Norwich in the early 1400s, they would have been able to settle their dispute once and for all. A short walk away from the cathedral is St Julian’s Church, which was home to the anchoress Julian of Norwich. 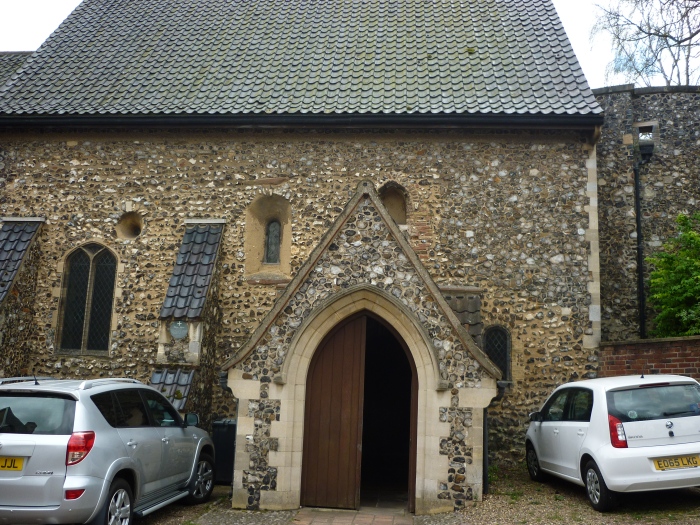 Although there’s little concrete information about her life, Julian of Norwich is still considered an important mystic and theologian. Her account of her religious visions, “Revelations of Divine Love” is thought to be the first book written in English by a female author! She lived out her days in a small cell in a church on this site, and her only contact with the outside world was through two small windows – one into the church, and the other looking onto St Julian’s Alley outside. Members of the public could pass by and ask Mother Julian for advice, and I think it’s fair to presume that she was called upon to settle a few disagreements in her time! 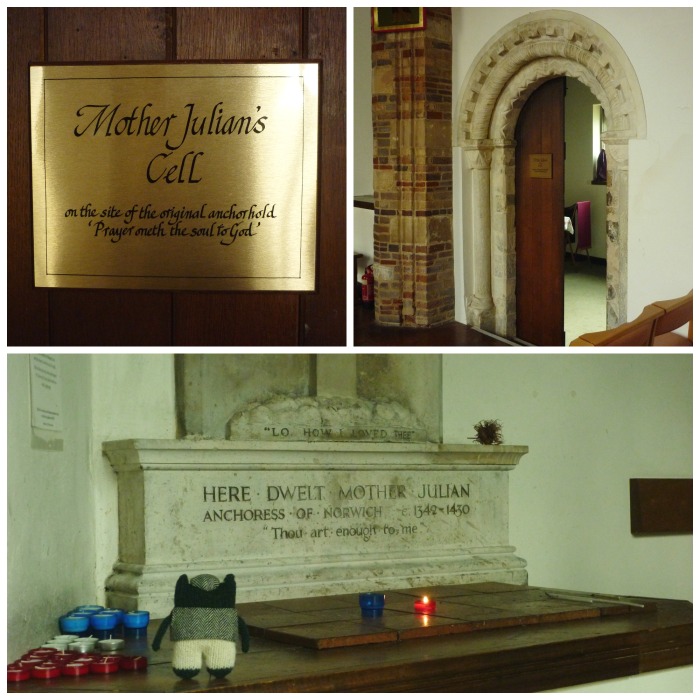 The real St Julian’s Church didn’t survive the Reformation during the reign of Henry VIII, but the building that stands today, as well as giving an impression of what the original would have looked like, tells a story of its own. The stones used to build it were reclaimed from another church, which was destroyed during the Second World War. Plunkett certainly seems to be enjoying the peace and quiet of this contemplative place!

Of course, it wasn’t long before Paddy felt the need for something a little more lively… A spot of shopping, perhaps?

Oh, and then he spotted THESE…

“Not just any old stone wall, my friends! A stone wall made with the hard-wearing local flint! Beautiful! Incredible!”

Uh-oh! I think we’ve lost him for the day! This all seems too familiar to poor Paddy, who remembers what happened on last year’s trip to Arundel Castle.

“I’ll leave you to it there, Plunkett! I’m going to go and hang out with these guys instead!”

I reckon there’s room in all that fancy stonework for a Beastie-shaped addition – what do you think?

More from the boys in a couple of weeks… I wonder where they’ll end up next?

38 thoughts on “Paddy and Plunkett, Bewitched by Norwich!”