Paddy and Plunkett really did make the most of their recent trip across the water to England! They might have started out enjoying the lively university city of Cambridge, but they saw no reason to stop there.

Time to take a trip down the road to Ely, a city which started life as an abbey on an island in the fens (marshlands) of East Anglia. The city’s history has been full of ups and downs, mostly starring that abbey – it was founded in 673, destroyed by Vikings in 870, rebuilt again a hundred years later, and then in 1083 a Norman abbot decided that the site would be just perfect for a new cathedral. Work began in the early 1090s, and the result was a building that still stands today.

Well, mostly… The Norman-era central tower actually collapsed in 1322. However, Ely Cathedral wasn’t going to let that cramp its style – the tower was rebuilt and then some! What stands there now is the famous Octagon, which you can see in the centre background of this photo.

As I’m sure you can imagine, Plunkett couldn’t wait to get inside this place for a closer look! Unfortunately, he really should have checked his diary first… 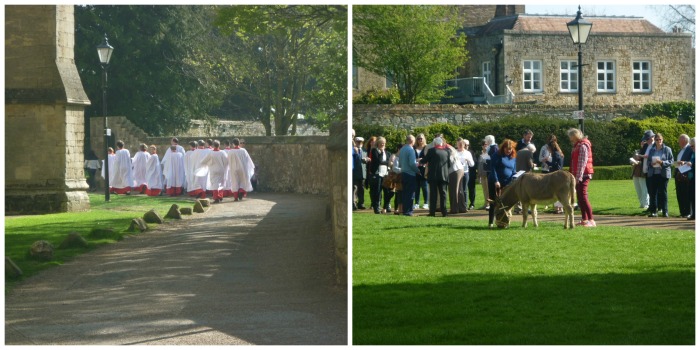 … Because it turns out that the lads had rocked up on Palm Sunday! They decided to let the annual procession (complete with full choir and real live donkey!) pass them by, and headed off in search of morning coffee on the banks of the River Ouse instead.

Paddy certainly wasn’t going to say no to another hour of lounging around in the sunshine!

Suitably caffeinated, the boys made their way back to the Cathedral… and this time they managed to get inside! Plunkett was immediately transfixed by the ornate interior…

…While Paddy enjoyed the colourful stained glass and mosaic floors! 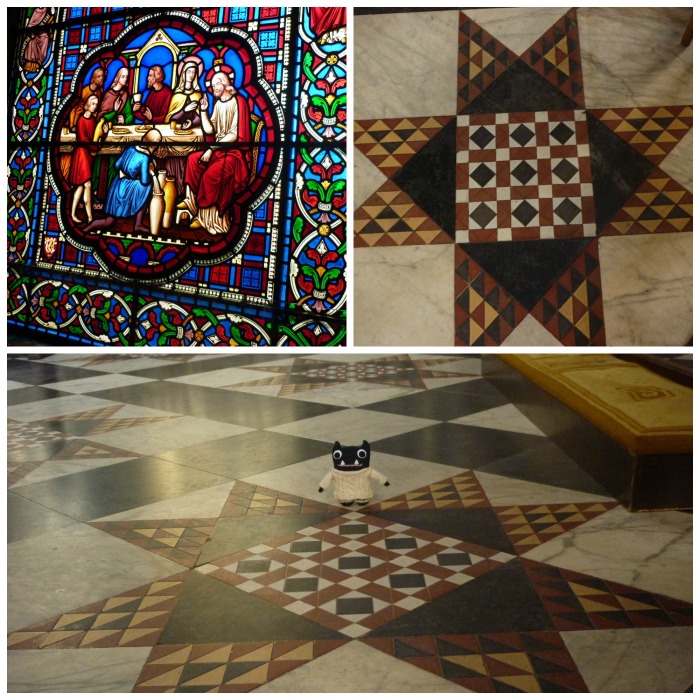 And then, there were the beautiful high arches of the Octagon!

“Paddy, did you know that the roof and lantern in the centre of this tower are held up by timber structures that couldn’t be built now, because there aren’t big enough trees any more?”

“I didn’t. But Plunkett, did YOU know that you can climb up to the very top of this place and look out over the city?”

One third of the way there, and the ground is already starting to look very, very far away…

But the view from the top of the West Tower was totally worth the dizzying heights and sore paws!

Well, it was for at least one of our monster friends!

Oh dear, poor Plunkett! Will the boys make it safely back to ground level, or will Paddy sign them both up for a tandem bungee jump off the top of the tower? All will be revealed in a couple of weeks!

In the meantime, don’t forget to join us again next Tuesday, when I hope to be sharing a tutorial and pattern for my little felt bees! See you then!