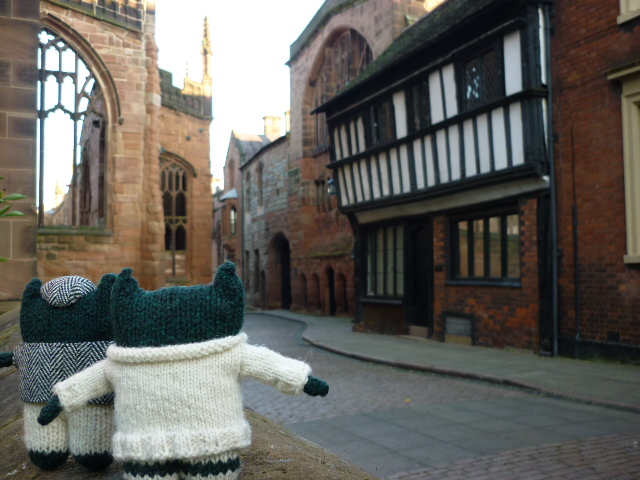 In my (now fairly distant) youth, I read a lot of Enid Blyton books. For the characters in these stories, the idea of being “sent to Coventry” was just awful – it’s a slightly dated idiom that describes the timeless playground punishment of completely freezing someone out, by pretending you can neither see nor hear them.

However, Paddy and Plunkett are complete strangers to the work of Ms Blyton, and being generally optimistic little creatures, they jumped at the chance to be sent to Coventry for their latest adventure! Their first stop was in the oldest part of the city – although much of Coventry suffered severe bomb damage during the Second World War, some buildings did survive. Let’s take a walk, shall we? 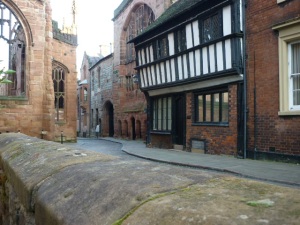 On the left of these photos, you can see the shell of the old St Michael’s Cathedral. Most of the cathedral was destroyed in the Coventry Blitz, but the spire (apparently the third tallest in England) still stands… in fact, Paddy and Plunkett were treated to the sounds of bell-ringing practice while they strolled around!

Next, they went to take a peek at the new St Michael’s Cathedral, which is just next door. It was opened in 1962, and looks very different to its 14th century predecessor. Paddy and Plunkett were hoping to catch up with St Michael himself, but when they found him he looked a little busy… 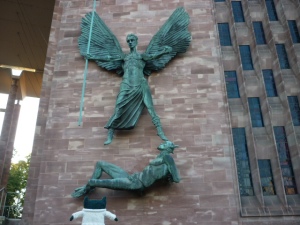 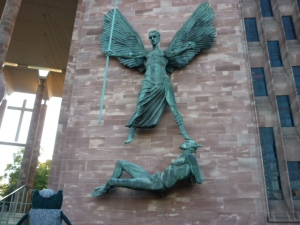 Never mind, there’s plenty more to see! Paddy has a bit of a thing for classic cars, so there was one place the boys definitely had to go…

Plunkett had to pose for the photo, because Paddy had already run off to have a look around.

The Transport Museum isn’t just for car buffs, either! From the very earliest days of two-wheeled travel, Coventry was a veritable hub of bicycle manufacture, so you can find all sorts of crazy bikes in here… 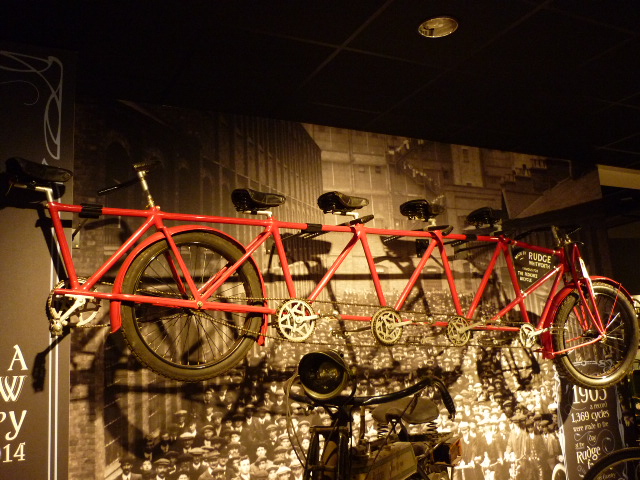 … As well as the cars Paddy wants to see! Here are the lads enjoying the rather morbid display of hearses.

And Paddy was thrilled to be able to see ThrustSSC, current holder of the land speed record!

He was just about to climb aboard and take it for a spin, but fortunately Plunkett was able to distract him by appealing to his inner showman…

That’s the way to do it, indeed!

And after checking out every vehicle in the whole museum, the boys were finally able to find a Beastie-sized one to drive home. Thanks for the lift, Brum! 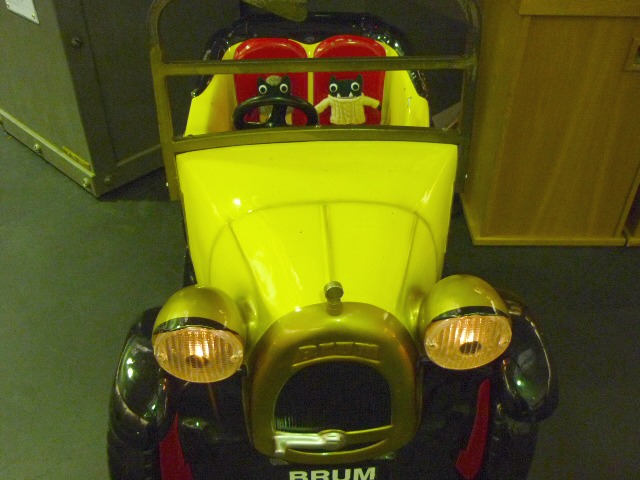 See you next time!

11 thoughts on “Sending Paddy and Plunkett to Coventry”