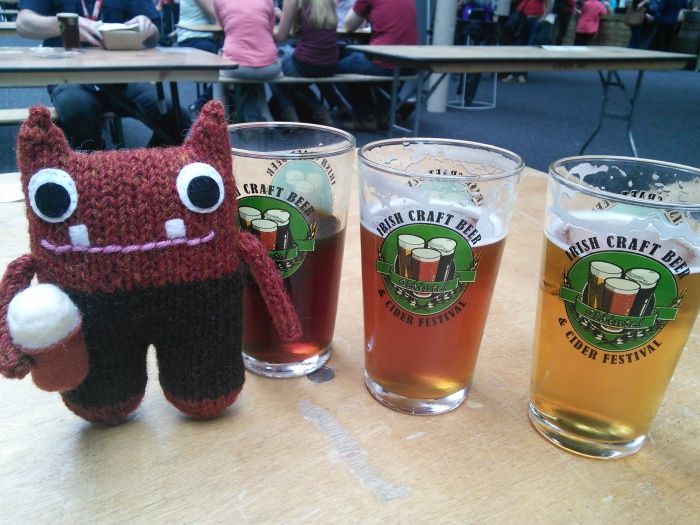 For the last couple of years, the first weekend in September has meant one thing… Beerfest! Or, to give it its full title, the Irish Craft Beer and Cider Festival. If there is a better way to herald the beginning of autumn than sampling an array of tasty beers, I’m yet to hear about it!

This year, I thought it might be fun to bring a new woolly friend along… Meet Red Ale Beastie! I felt he was the perfect festival-going companion, given his penchant for fine ales and his all-Irish (ie, knitted from 100% Irish wool) roots. 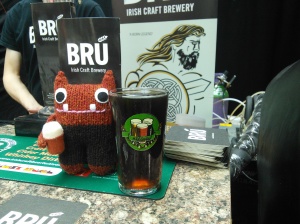 Here he is at our first port of call… The Brú Brewery stand! Neither of us could resist the lure of their Autumn Ale, flavoured with cinnamon, coriander, orange peel and a hint of butternut squash! Yum!

Having got the day off to an excellent start, we decided to treat ourselves to a late lunch/early afternoon tea… This was mostly due to Boyfriend reappearing at the table with one of these: 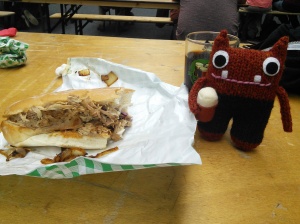 That’s a pulled pork sandwich, made with free-range pork cooked sous vide with cider for around 12 hours, served with barbecue sauce and caramelised onions. WOW. So we made a beeline for Jane Russell’s stand and picked up one for ourselves… and Red Ale Beastie made a friend while our sandwich was being assembled!

Suitably refreshed, we had to give The White Hag brewery’s Meabh Rua Bog Ale a try… this tasty treat is a bit of a heavy hitter at 8.2%, but it was absolutely delicious. They claim it’s perfect for a cold Irish night, and they might just be right… the bad news is that it’s an export-only brew! Overseas readers would do well to keep their eyes peeled for this one, and their Black Boar Imperial Oatmeal Stout, which was Boyfriend’s pick of the day! 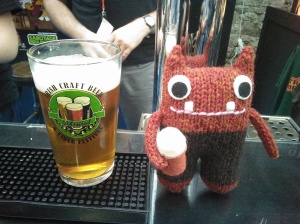 As always, we had a great day out… but the immense selection on offer defeated us! I’m pretty sure we barely scratched the surface of the beery delights available to us yesterday. Oh well, I suppose we’ll just have to go back next year… Happy weekend, everyone!