Hello everybody! How’s your week going? We’ve been enjoying some beautiful crisp Autumn days here recently – the bright sun and cool air really helps clear the cobwebs. So, it will be no surprise to hear that Paddy and Plunkett have been out and about, and a little closer to home than usual, too. Let’s join them for a wander in the woods!

At the edge of the forest…

Ah, there they are! About to hop over the gate and go inside.

Uh-oh! Looks like excitement has got the better of Plunkett! 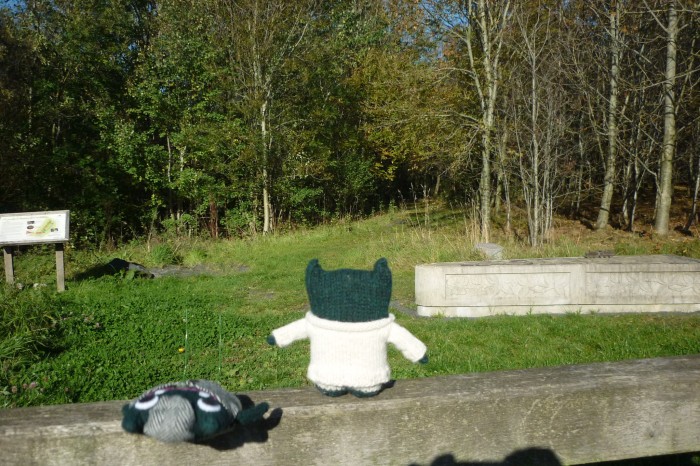 Fortunately, Paddy’s ninja-like reflexes saved him from a nasty tumble. But maybe next time they should go through the turnstile at the side, the way human visitors do.

Paddy has already spotted something interesting up ahead – that big white wedge-shaped stone!
“Hey, look! We’re in Canal Wood!” 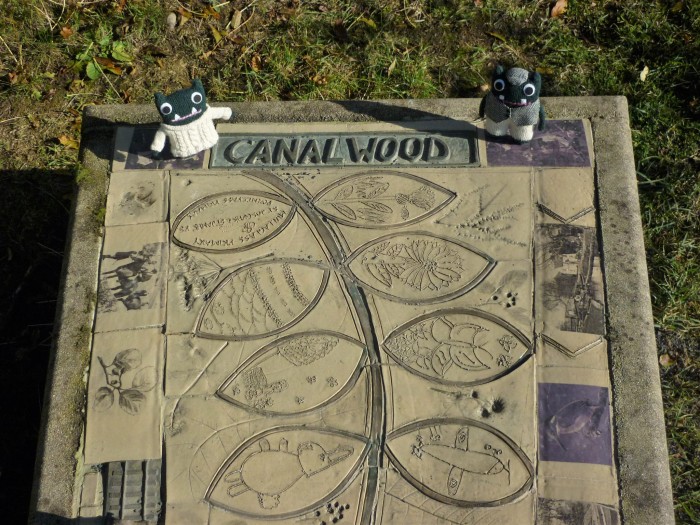 Canal Wood is pretty young, as woods go. Volunteers from the Woodland Trust, a British conservation charity, planted the first trees to mark the millenium. Then, in 2014, extra funding allowed a few spiffy new features to be added, like better paths, a boardwalk over the marshy areas… And this sculpture! These leaves in the centre were designed by local schoolchildren – they show things like the wildlife you might meet on your visit, and the hand tools used to build the railway line and canal that border the woods.

To Paddy’s delight, it also features a Beastie-sized train and canal barge!

But as you go deeper into the woods, it’s easy to forget that these busy thoroughfares are close at hand. It’s so peaceful here! Plunkett is really in his element.

But peace and quiet isn’t really Paddy’s deal. It wasn’t long before he started looking for mischief… And he found it, in the shape of an unattended tandem.

He had high hopes of whizzing along the towpath of the Newry Canal on a bicycle made for two… Except that this one isn’t exactly made for two Beasties. Better just hop in one of the paniers and let the humans do the legwork when they come back!

This small village originally grew up around a crossing point in the surrounding marshes. Later, it became an important port on the canal, a link in the Belfast-Dublin railway and hosted a large monthly cattle market. It’s a little quieter now, but this beautiful metal sign celebrates its busy past. Plunkett had a closer look while Paddy dashed off to get some coffee – because of course, Paddy needs more hyperactive energy.

As well as the cattle market, horse-drawn barge and railway, the sign also shows the old schoolhouse and celebrates the awarding of the Victoria Cross (the most prestigious military decoration in Britain) to a locally-born man. Plunkett couldn’t resist getting a little closer – but then… 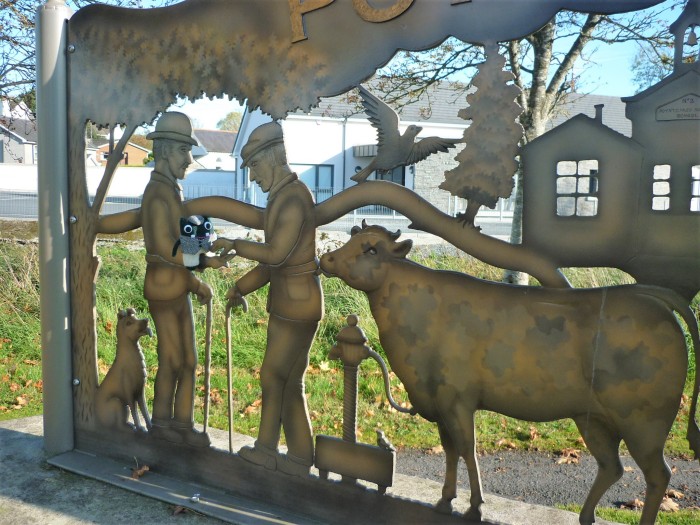 Oh no! He’s been bartered for a prize cow!

Will he ever find his way home? You’ll have to join us next week to find out!

Those of you who regularly check in with the Beasties’ Facebook page might remember Explorer Beastie’s trip to the Bee Garden at Moneypenny’s Lock back in July. The awesome all-you-can-eat bee buffet is just one part of an ongoing project to restore this stretch of the Newry Canal…

But Moneypenny’s Lock is also home to another incredible plant – and this one has been around a lot longer. Meet Moneypenny’s Yew!

And exactly how long has this tree been standing guard over the Lock-Keeper’s Cottage? Well, here she is as a young lady, in 1886…

Imagine all the changes she’s witnessed in her lifetime – the busy canal becoming quieter, falling into neglect, then being given a new lease of life in the last few years by a group of enthusiastic volunteers.

Paddy and Plunkett are big fans of this special tree, too! 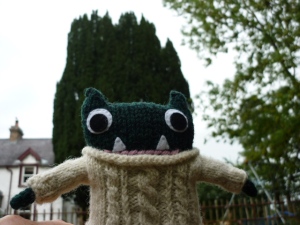 That’s why we’re all hoping you might take a minute to give Moneypenny’s Yew your vote in the Woodland Trust’s Tree of the Year Competition. She’s up against some stiff competition – including the celebrity trees of the Dark Hedges (as featured in Game of Thrones). But I think it’s high time this tree, in a quiet part of the country, got her moment in the sun!

You can cast your vote here, on the Woodland Trust’s website.

Good luck, Miss Moneypenny – the Beasties and I are rooting for yew!