As you already know, we had a rather soggy day in Kew Gardens…

… During which time the boys found a novel way of staying out of the rain.

“Outta the way, camera! This is a Beastie bag now!”

So we were pretty happy when the next day was dryer and brighter. Perfect for a visit to Highgate Cemetery! And doesn’t it look beautiful in the morning sunlight?

I love to visit graveyards when I travel. They provide a peaceful respite from any jam-packed sightseeing schedule, and they can help you see another side of the place you’re visiting. As it turns out, Beasties like them too! 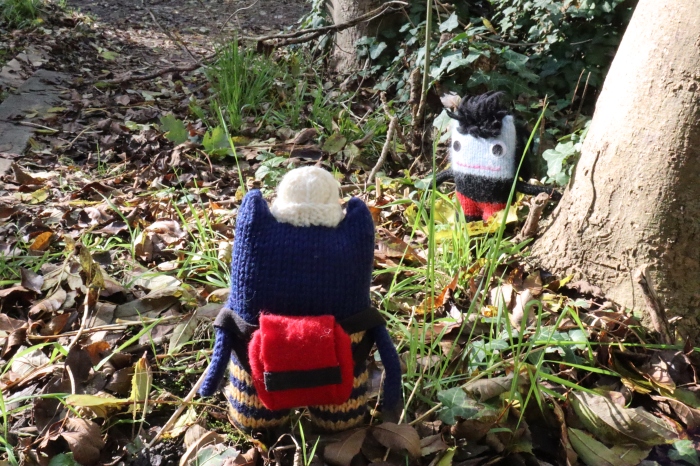 Well, they do find us humans endlessly fascinating. And while there were occasional opportunities for mischief…

… For the most part, they behaved exceptionally well.

For the first part of our visit, we were in Highgate Cemetery East. Humans and Beasties can wander freely around this newer part of the cemetery for a small fee, and there’s so much to see here! While many of the monuments are fairly traditional…

… There are a few less conventional ones dotted along the tree-shaded avenues too. This one, which marks the grave of pop artist Patrick Caulfield, especially caught my eye!

You can also find a few famous faces (or at least their headstones) in the eastern cemetery. I liked these two, which commemorate entertainer Jeremy Beadle and artist/impressario Malcolm McLaren… 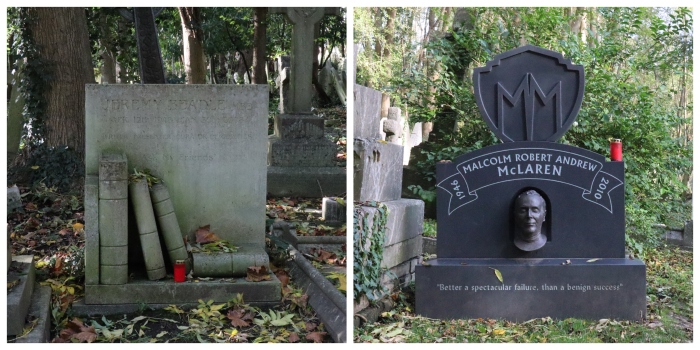 … But keep your eyes open as you stroll around and you could also meet Douglas Adams, George Eliot, Karl Marx or Bruce Reynolds, who masterminded the Great Train Robbery!

Then again, this is only half the story. The older, western side of Highgate Cemetery dates back to 1839 – a time when the “cosy” living conditions in Victorian London were mirrored by the extreme overcrowding of local church graveyards. Certainly not ideal if you’re trying to bury your loved ones… And even less so when nasties like typhoid and cholera come along to join the party.

Enter the London Cemetery Company, who made it their business to offer a higher class of resting place to those who could afford it. With landscaped locations on what was then the edge of the city, and exotic architectural features, these “garden cemeteries” were a big hit. A trip to Highgate or one of its sister cemeteries became a popular day out among the living – you could even buy guidebooks to help you find your way around!

The graveyard fell on hard times in later years, though. British burial customs differ from those of many other countries, in that once you’re buried, your grave is yours forever. As Highgate filled up, fewer new plots were bought, and that meant less money was coming in. The company couldn’t afford to maintain the facilities, and it was a downhill slide from there.

Who knows what might have happened if a charity, the Friends of Highgate Cemetery Trust, hadn’t stepped it to get things back on track? The group works hard to ensure that the atmosphere of “romantic decay” that makes this place so interesting is preserved, but doesn’t get a chance to go too far either.

That said, it’s still a bit wild in there, so the only way to see the Western Cemetery is on a guided tour. And this gets a big paws up from the Beasties! Our guide, Brittany (hope I remembered that correctly) was so entertaining and informative that our tour zipped by in a flash… And we totally forgot to take pictures! My camera only made an appearance near the end, so that I could capture this handsome fellow…

Meet Lion, the beloved mastiff of Tom Sayers, a bare-knuckle fighter who rose to fame in the 1850s. Although he was quite short and lightly-built, he frequently took on (and defeated) much larger, heavier opponents. This is probably what made him so popular – when he died in 1865, around 100,000 people attended his funeral! Unfortunately, due to the acrimonious state of his marriage at the time, it fell to Lion to be chief mourner… So it’s perhaps fitting that the grave commemorates him as much as his master.

… To see the rest, you’ll have to take the tour yourself!

Join us again next week, when I’ll have new projects galore to share… See you then!