Hello there Beastiebuddies! We’re heading back to Cornwall this week, to rejoin Paddy and Plunkett as they make their way to the very top of the 50m tall Rainforest Biome at the Eden Project… No mean feat when you’re only 6 inches tall! Since I’ve wanted to visit Eden for a reeeealllly long time, the boys were good enough to go along with the camera and show me what it’s like. Cheers lads! Here are some of the highlights of last week’s adventure, or click to catch up on the full post.

I only hope they’re still talking to me after that long uphill trek! Let’s see how they’re getting on. 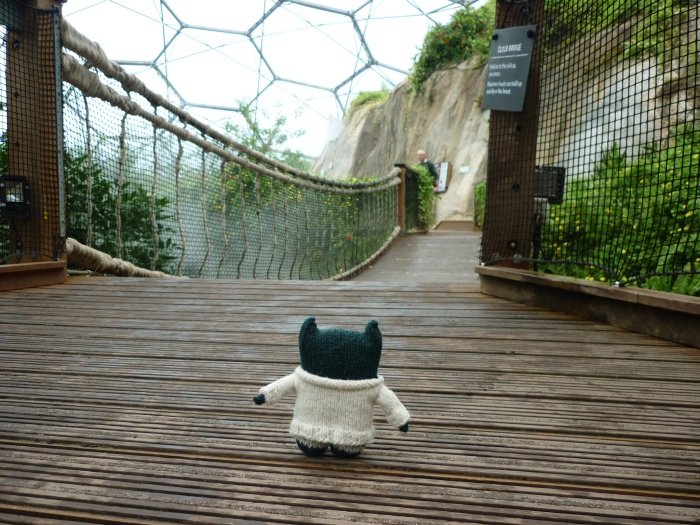 “You can see loooooads from up here! We found another waterfall, like the one at Babbacombe…”

“…But the people down below just keep on getting smaller!”

From up here, you can really see how the Cornwall landscape has been incorporated into this captive jungle – amazing! And soon…
“Taaaa-daaaaah! We made it! Hey Plunkett, take my picture!”

The thing about being above the rainforest canopy, but underneath the protective dome that shelters it from the British weather, is that it gets very, VERY hot. Too hot for Aran sweaters, as it turns out. So after a nanosecond of consideration, Paddy removed his and used it as a parachute to skip out on the walk back to ground level.
“See you later, Plunkett! Wheeeeee!”

Do I really need to mention that parachuting isn’t Plunkett’s cup of tea? Probably not. So, he took his time wandering back downhill… And he was glad he did. Look who he bumped into on the way!

These are roul-roul or crested partridges, and they’re not just here for show. By eating their fill of bugs and grubs, they’re providing a valuable natural pest control service to Eden’s leafy inhabitants!

And Plunkett couldn’t help but chuckle when he saw this…

“Hahaha! Jaguars crossing! Paddy will love this.”
And he didn’t have to wait long to tell him about it. Paddy was just around the next corner!
“Paddy, did you see the jaguar crossing sign back there? Hilarious! As if there’d be jaguars in here!”

But Plunkett was in for a surprise.

“Sure there are, Plunkett! There’s one right there!” 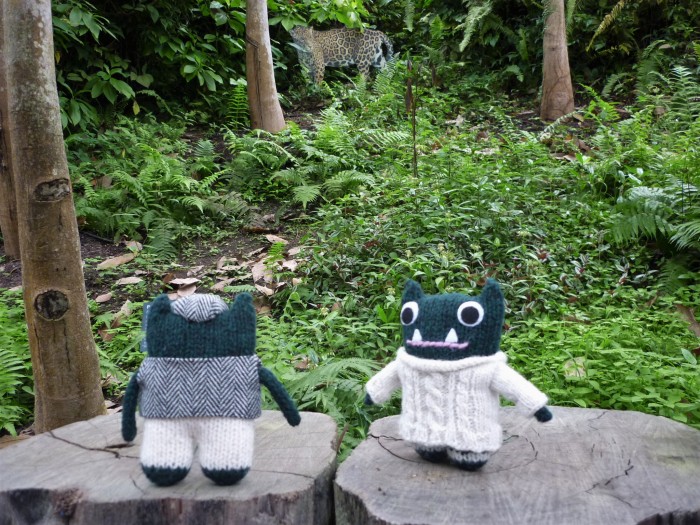 Oh dear. Poor Plunkett! Hopefully it won’t take him too long to calm down again, and he’ll join us next week for a sedate wander around the outdoor areas of the Eden Project. I’m pretty sure they’re jaguar-free!

As for me, I’ll be back on Friday with more monster fun and games. In the meantime, have you ever met any unusual local wildlife on your travels? Share your tales of terror in the comments, and maybe Plunkett will feel better!