The boys are stepping back in time again this week – and a little further than usual, too! Today finds them exploring Flag Fen in Cambridgeshire, which had its heyday 3,300 years ago!

What was this place, a harbour? 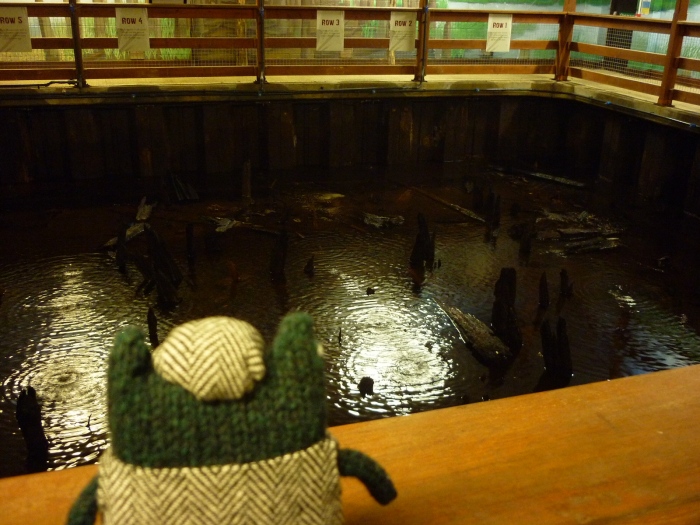 Well, not exactly. A fen is an area of marshy ground, and they’re pretty prone to flooding. While many of the fens in this super-flat part of eastern England were drained to create extra farmland in the 17th century, in the Bronze Age these places would have been tricky enough to navigate. Too wet to walk, too shallow for a boat… GAAAAAAAH! What to do?

Answer – you build a raised walkway over it, and strut across in style without getting your paws wet! And that’s what these timbers are – the remains of a trackway that led to a huge platform out in the fen. It’s kept nice and damp to help to preserve the ancient wood…

… And what Plunkett is looking at in the first photo is only a fraction of what is actually there. The whole causeway is more than a kilometre long, and the platform is the size of Wembley Stadium!

Building something on this scale, in this location, at that time would have been a huge undertaking – so why is it here? Unfortunately, our Bronze Age friends weren’t much for writing things down, so we can really only speculate (wildly, in Paddy’s case) about what this place was used for. However, the archaeologists who excavated the site back in the 1980s found way more of this kind of thing than they expected…

These bronze finds – mostly weapons – intriguingly show signs of having been deliberately damaged, and their positioning in the silty ground suggests that they were intentionally dropped there, rather than carelessly chucked away because they were broken. This implies that the causeway was a place of ritual significance, as well as (possibly) being a handy way of getting across Flag Fen!

There’s plenty of opportunity for you to get in touch with your Bronze Age roots around here too… Plunkett took a stroll into this reconstructed roundhouse, built on the site where a real one was excavated!

Meanwhile, Paddy was trying on some wooden beakers for size… Because, well, that’s what Paddy does.

The lads also rested their weary paws on this rather spectacular chair – we think it might be made of bog oak, preserved timber that has been coloured and hardened by years of sitting in the acidic water of the marshes! 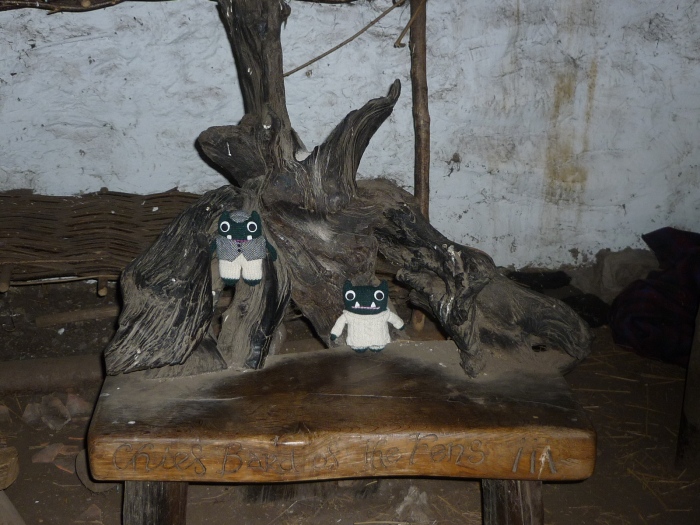 Unfortunately, Paddy had less success with this replica dugout canoe…

“Row faster, Plunkett! It feels like we’re not moving at all!

This is a copy of one of the boats that was unearthed at Must Farm, just down the road. The real ones are still undergoing preservation work and some of them are really enormous!

Now, what’s been missing from this trip so far? That’s right – SHEEP! This visitor centre is home to a herd of lively Soay sheep, the closest living thing to the kind of sheep that you would have seen trotting around here in the Bronze Age.

While Paddy attempted to make friends with some of those lambs, Plunkett took a moment to enjoy a last look out over the site.

It’s really been quite a trip!

Paddy and Plunkett will have their paws back on comparatively dry land when they rejoin us in a couple of weeks. And next Tuesday, I hope to have some exciting new BeastieBlog developments to share with you all! See you then!

26 thoughts on “Beasties in the Bronze Age”