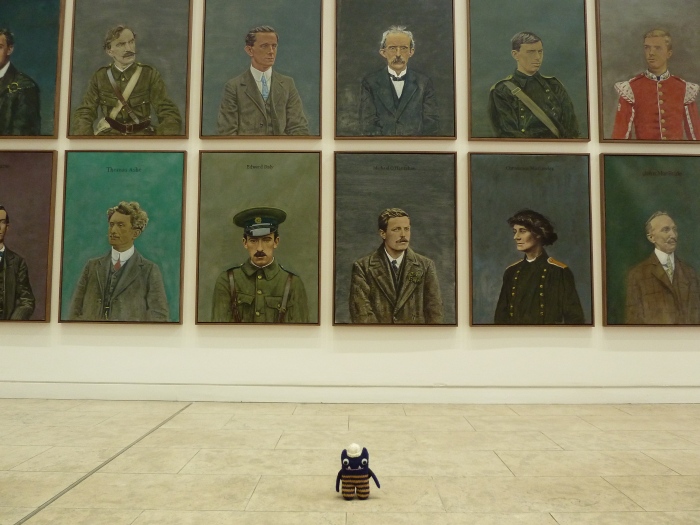 In Ireland, it’s very tempting to hide yourself indoors at this time of the year… and remain there until dire necessity (buying food, going to work, zombie home invasion) forces you outside. I for one could happily spend February living on instant noodles and baked beans while binge-watching “Murder, She Wrote”, but fortunately Explorer Beastie is a more active fellow, who constantly demands entertainment, fresh air and brain food (surprising for one whose head is literally full of fluff). So yesterday, I put down my knitting needles and took the two of us off to another of our favourite destinations – the RHA (Royal Hibernian Academy) Gallery, a mere stone’s throw from St Stephen’s Green and Grafton Street in Dublin’s south city centre.

This great little gallery deserves more visitors than it seems to get – I suppose a lot of people overlook it, and head to the National Gallery a little further down the road instead. But while the majority of the National Gallery’s exhibitions remain static, the RHA always has something new on its walls. In fact, I’ve never seen the same thing there twice! It’s also small enough that you could see everything in a short visit, and it’s also FREE IN! What’s not to like?

When we were there yesterday, three artists had their work on display. We started out with Maeve McCarthy’s “The Return”, a collection of nightime landscapes in charcoal inspired by a visit to the farmhouse where she and her family spent summers as children. 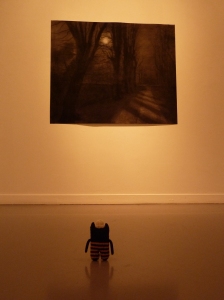 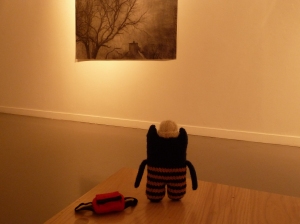 The artist also collaborated with her brother, a filmmaker, to make a short film showing the decaying rooms of the abandoned house. 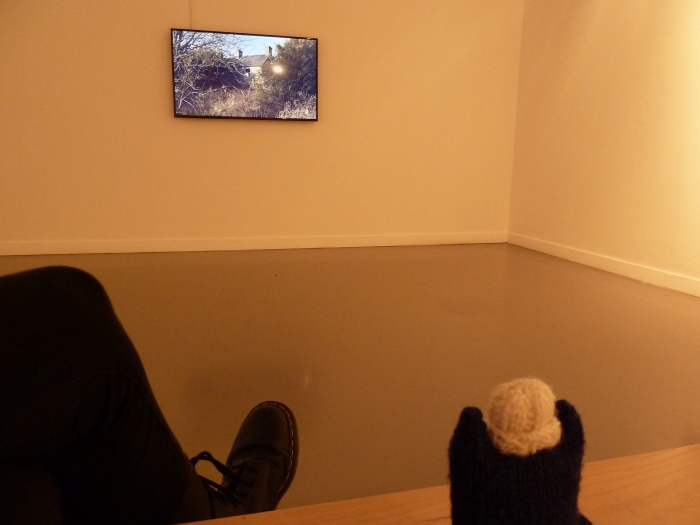 2016 is an important year for Ireland – it’s the 100th anniversary of the 1916 Easter Rising, which was one of the most significant events in setting Ireland on its way towards independence from Great Britain. The other two exhibitions we saw drew their inspiration from this – Mick O’Dea’s “The Foggy Dew” included portraits of some of the key figures in the Rising… 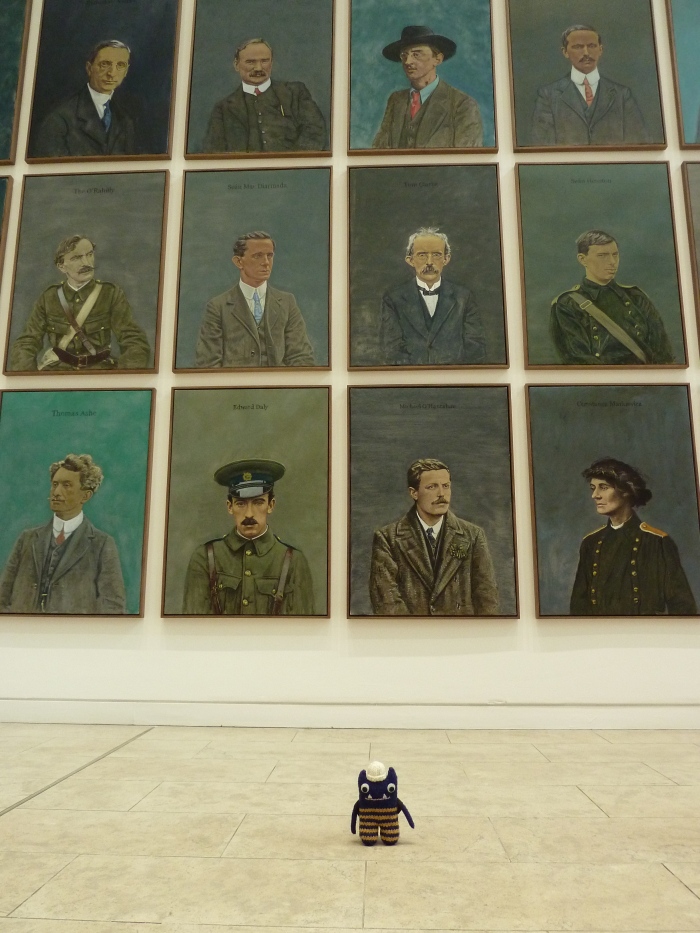 …And in a separate gallery upstairs… 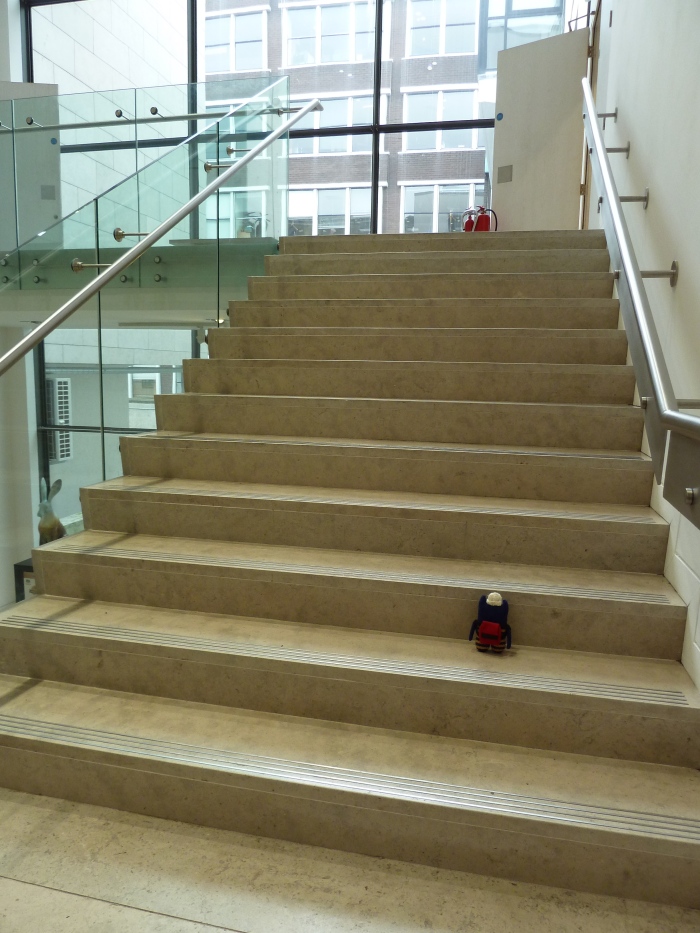 … A combined installation of large-scale canvasses and sculptures. 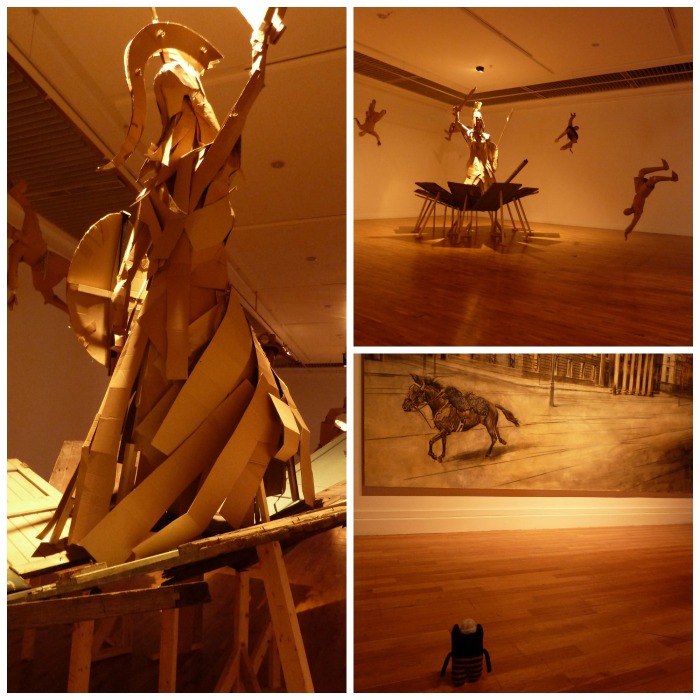 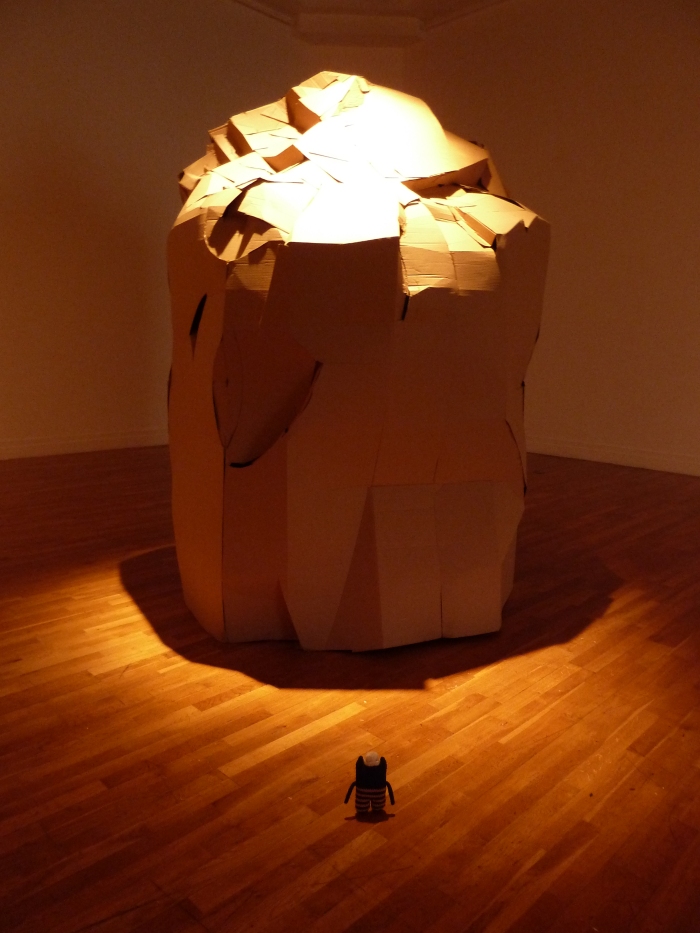 Then our final port of call was “Before, During, After… Almost” – an exhibition of David Farrell’s photographs, which shows how much both Dublin and rural Ireland have changed since the 50th anniversary of the Easter Rising, in 1966. 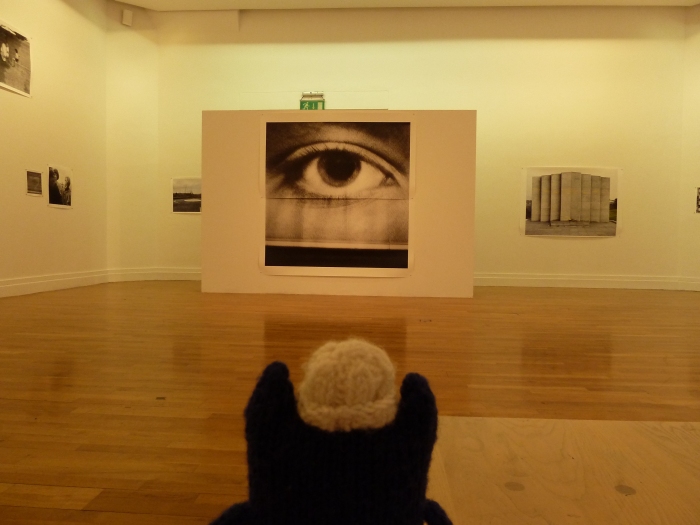 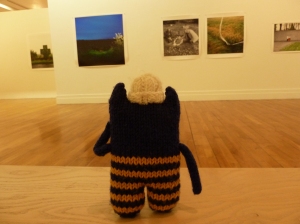 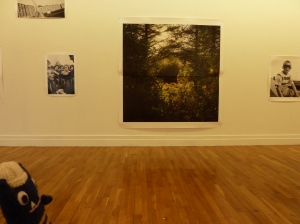 And suitably inspired by our artistic wanderings, it seemed like a good time to tackle the first prompt in Tammie Painter’s Sketchbook Saturday. Yeah, I know I’m late. It’s my… um… artistic temperament.

Anyway, the theme was “Round and Around”, which made me think of all the circles and spheres that cropped up in my drawings and craftings when I was a kid. 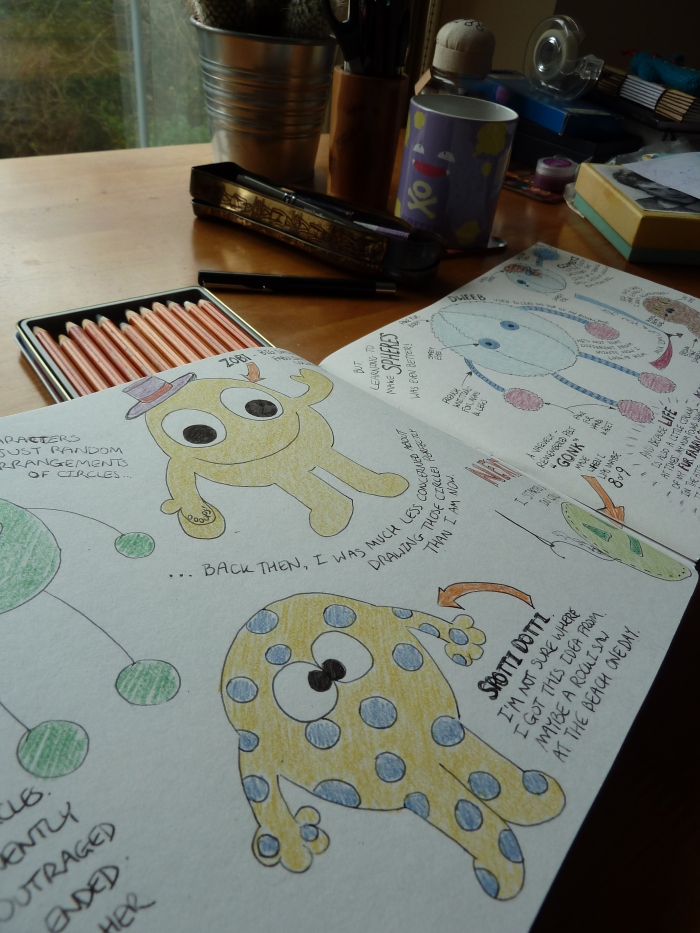 …And in case you want to read the scribblings… 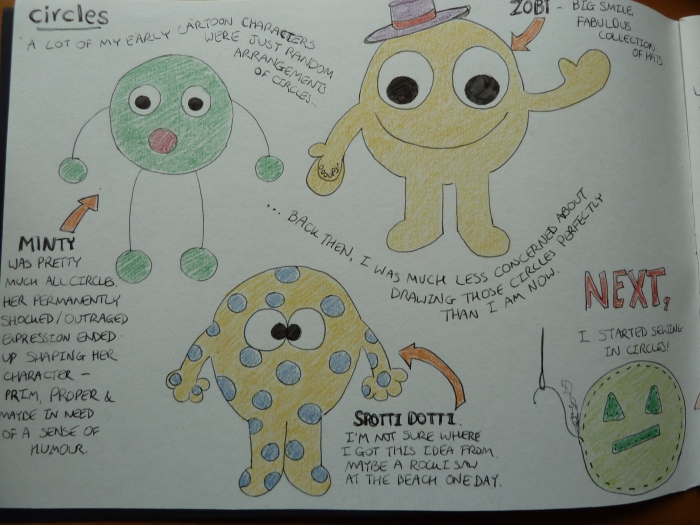 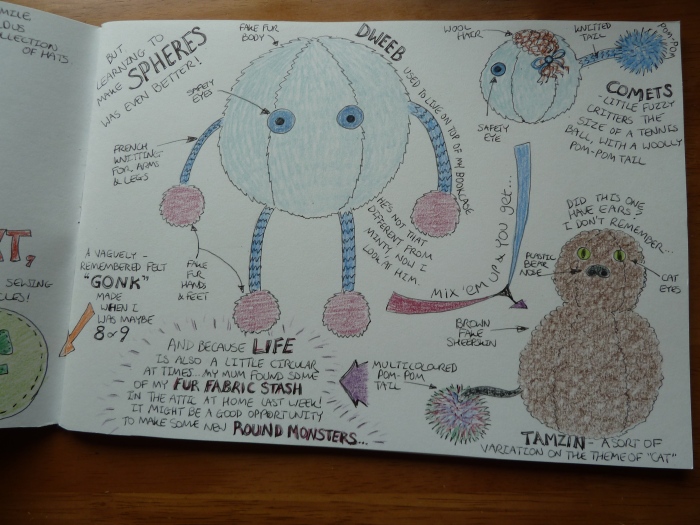 And of course, Crablet and Explorer Beastie were on hand to help out with the colouring in. Thanks, lads. 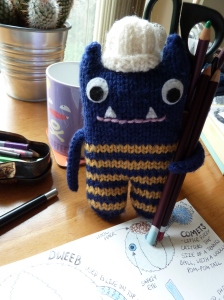 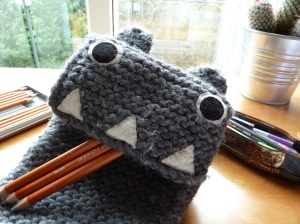 AND FINALLY… Eagle-eyed Noémie at FocalHeart spotted one of my knitting notebooks in the background of a photo I posted recently. Here it is up close! 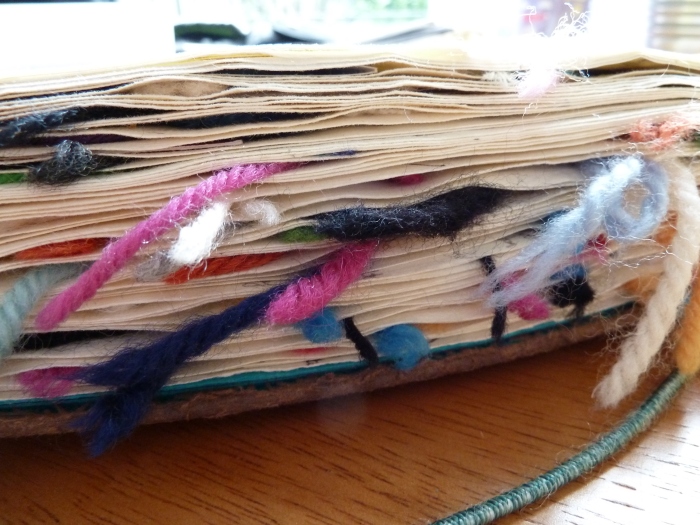 I use these books to record patterns, jot down ideas, count off rows and (as you can probably guess) keep track of the yarns I’ve used. And I had a great time going through past books today, snapping some of my favourite pages to share! So, since this post is already MASSIVE, here’s a taster for today… 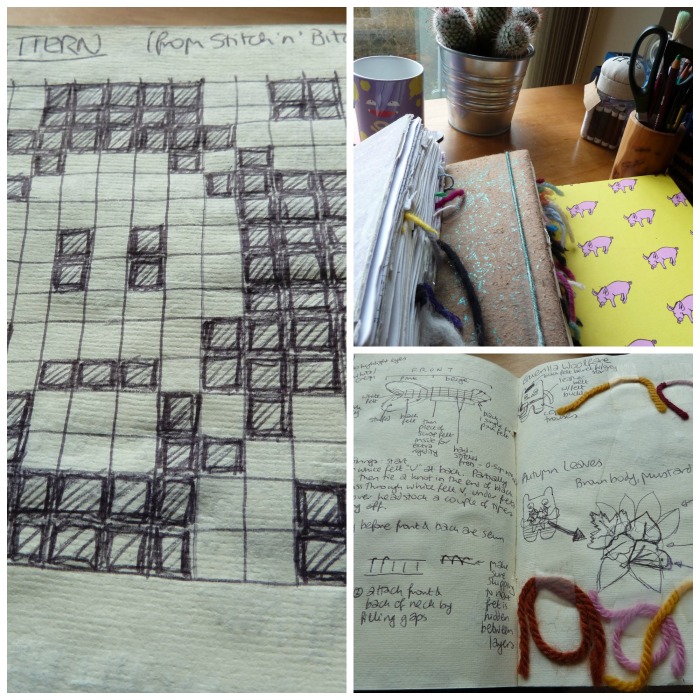 … And I’ll have more next week!

Hope you all enjoy the weekend – why not check out Sketchbook Saturday for yourself tomorrow?