And since this is the last full week of August – and, in my mind, the end of the summer – I wanted to take this opportunity to introduce you to one last Summer Barróg Beastie before we head into the autumn. So, without further ado, let me present – Hurling Beastie!

I have to confess to having had very little contact with Gaelic games and the GAA (Gaelic Athletic Association) before I moved across the border to Dublin. I suppose my profound lack of interest in any kind of sport (Irish or otherwise) probably didn’t help matters. But I do remember the first time I saw Gaelic football and hurling on TV… I was watching the news on the ancient 1980s TV I had in my college dorm room, and I didn’t get a chance to switch it off before they moved on to the sports. The football coverage was on first, and what made me stop and watch open-mouthed was the extent to which the players seemed, to my very untrained eyes, to be just whaling on each other. Then they moved on to talk about the day’s hurling, which was the same story… but this time the players had weapons!

I was transfixed – this seemed so much more fun than regular football, where the players fall over clutching their knees and wincing if someone so much as looks at them, or the lacklustre hockey and netball I was made to play in school.

So when I was trying to think up a sporty-themed summer Beastie with an Irish twist, I just had to have a go at making a hurling player. In some of the larger parks in Dublin (like the massive Phoenix Park, for example), a sunny day will see kids taking their hurls (that’s the stick, traditionally made from ash wood) and sliotars (the hard little ball) out for a knock-about, to hone their skills. And it is a skilful game… you can hit the ball on the ground or in the air, and although the rules allow the ball to be carried over short (4 paces, officially) distances, most players choose to keep possession by balancing it on the end of their hurl and running with it. Given the trouble I had with the egg and spoon race in primary school, this kind of ability is pretty much superhuman in my book… and don’t even get me started on the goalies, whose job it is to stop the rock-hard, speeding sliotar and prevent their opponents from scoring. They must have nerves of steel!

Anyway, having kitted Hurling Beastie out with his hurl and sliotar… 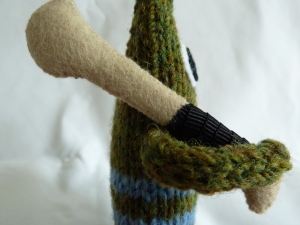 It was time to let him outside to play!

Unfortunately, it wasn’t long before he lost his ball in the long grass!

Ooooops! Something tells me he has a long afternoon of searching ahead… I’ll let you know how he gets on!

In the meantime, if any of you would like to find out more about Gaelic games, you can check out the GAA’s official website here!

14 thoughts on “Last Days of Summer…”